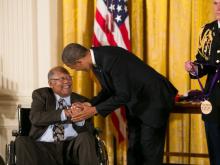 Poetry Out Loud National Finals Broadcast May 2 and 27, 2021 at Arts.gov