Winner of a 2014 National Medal of Arts from President Barack Obama, Tobias Wolff is a novelist, memoirist, short story writer, Vietnam veteran, Stanford professor, family man and a National Endowment for the Arts creative writing fellow. His memoir, This Boy's Life (Grove Press, 1989), tells the story of his early days in the 1950s—moving with his mother from Florida to Utah to Washington state—and his rough years as a young adult at the hands of an abusive stepfather in a small town north of Seattle. It was made into a 1993 film starring a young Leonardo DiCaprio. The Philadelphia Inquirer describes the memoir "as grim and eerie as Great Expectations, as surreal and cruel as The Painted Bird, as comic and transcendent as Huckleberry Finn." "So absolutely clear and hypnotic," says The New York Times, "that a reader wants to take it apart and find some simple way to describe why it works so beautifully." Says The Independent, "Tobias Wolff writes like a man winning his way towards truth."

"When we are green, still half-created, we believe that our dreams are rights, that the world is disposed to act in our best interests."

—from This Boy's Life

"[This] extraordinary memoir is so beautifully written that we not only root for the kid Wolff remembers, but we also are moved by the universality of his experience." — San Francisco Chronicle

Tobias Wolff's memoir, This Boy's Life (Grove Press, 1989), is a story about a mother and son trying to survive in 1950s America. Separated from his father and brother and without good male role models, Wolff struggles with his identity and self-respect when his mother moves the two of them across the country. They eventually settle in northern Washington where Wolff finds himself in a battle of wills with a hostile stepfather. Wolff's various schemes—running away to Alaska, forging checks, and stealing cars—lead to an act of self-invention that releases him into a new world of possibility. "Wolff writes in language that is lyrical without embellishment, defines his characters with exact strokes and perfectly pitched voices, [and] creates suspense around ordinary events, locating the deep mystery within them" (The Los Angeles Times Book Review).

When Wolff is ten years old, his mother, Rosemary, decides to move them from Florida to Utah, caught up in the desire to strike it rich digging for uranium. When that doesn't work out, they move to Seattle where Wolff finds an outlet for his frustrations through shoplifting, drinking, breaking windows, and writing obscenities in public places. Rosemary, meanwhile, meets Dwight, a man from the town of Chinook, 70 miles north, who succeeds in persuading her to marry him. Wolff spends the rest of his childhood with his mother and Dwight in Chinook, enduring Dwight's petty meanness and cruel verbal and physical abuses. In an attempt to escape Dwight's relentless berating, Wolff joins the Boy Scouts, but Dwight makes himself an assistant scoutmaster. Wolff becomes friends with a boy in his school, Arthur Gayle, but Dwight encourages Wolff to fight Arthur, calling him a "sissy." The high school crowd Wolff eventually joins is far from upstanding. "I grew up in a world where violence was all too common—not deadly violence, so much, but beating, bullying, and threats—certainly in relations between boys, and between men, and often between men and women," Wolff told The Paris Review.

Wolff lives much of his adolescence in his imagination, dreaming up ways to escape his reality. He finally does escape by getting accepted to a prestigious school on the east coast based on fictitious claims that he was a top student, star athlete, and model citizen. The last time he sees Dwight is when Dwight follows Wolff and his mother to Washington, D.C. and tries to strangle his mother. He was "standing in a snowstorm, with policemen holding his arms," said Wolff. "My mother had bruises on her throat for weeks afterwards. They found a knife that he'd thrown into the hedge" (The Guardian). When This Boy's Life came out in 1989, Dwight was still alive, though very ill. "One of my stepsisters called me in a fury and said that her daughter had read aloud This Boy's Life to Dwight while he was lying in bed, and he was so hurt by it," said Wolff. "I think maybe she should have looked at it first" (The Guardian).

Wolff didn't set out to publish a memoir. He was more interested in recording memories "so that my children would know how I grew up," he says. "They were raised in an academic atmosphere, and my mother by that time was a very proper old lady" (The Guardian). "As I started getting these memories down, they took over," he said. "Writers wait for that moment when the material starts to carry them. It happens more rarely than one wants to think, and you're a fool if you don't give in to it when it does" (The Paris Review).

"Wolff writes in language that is lyrical without embellishment, defines his characters with exact strokes and perfectly pitched voices, [and] creates suspense around ordinary events, locating the deep mystery within them," writes The Los Angeles Times Book Review. This Boy's Life was made into a 1993 film of the same name directed by Michael Caton-Jones and starring a young Leonardo DiCaprio as Wolff, Robert De Niro as Dwight, and Ellen Barkin as Wolff's mother. It's a story that resonates in more than one medium. "We live by stories," Wolff told The Paris Review. "It's the principle by which we organize our experience and thus derive our sense of who we are." 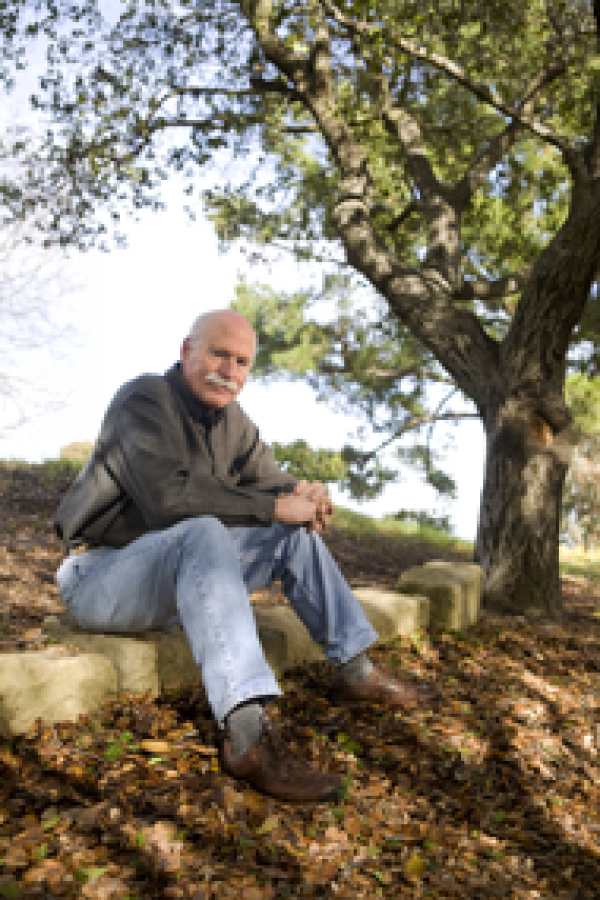 "Wolff's writing makes us recognize those aspects of ourselves that are hardest to acknowledge: our selfishness, our pride, our cowardice. But he also brings to light our potential for self-understanding and compassion." — The Believer

Tobias Jonathan Ansell Wolff was born in Birmingham, Alabama. His father was an aeronautical engineer, but also a pathological liar and con artist according to the 1979 memoir The Duke of Deception (Random House, 1979), written by Wolff's older brother, Geoffrey. As a result of one of these many deceptions, Wolff, who was raised a Catholic, did not discover until adulthood that his father was Jewish. His mother was a waitress and secretary known for her humor and determination. "If I'd known both my sons were going to be writers, I might have behaved differently," she once joked to Wolff (The Guardian).

Wolff's parents separated when he was young. His brother—who was seven and a half years older than Wolff—lived with his father; Wolff was raised by his mother in Florida, Utah, and Washington state. At the age of 10, Wolff changed his name to "Jack" after the author Jack London. He was an avid reader, idolizing writers like London, Ernest Hemingway, George Orwell, and Anton Chekhov. He also loved writing stories. "I used to write them for friends of mine, to turn in for extra credit," he told The Missouri Review. "I never really made the connection between the things I read and the writing I was doing until I was a freshman in high school, when a friend of mine said to me one day, 'You should be a writer,' and the idea stuck."

Eager to escape rural Washington and life with his stepfather—experiences he recounts in his memoir This Boy's Life (Grove Press, 1989)—he won a scholarship to the Hill School, a prestigious academy in Pottstown, Pennsylvania. He loved the school but struggled there and was ultimately expelled because of failing grades in math. His first novel, Old School (Knopf, 2003), is based on these experiences. He told The Paris Review that the school granted him his diploma in 1990, "but only after the headmaster made sure to read a selection of Wolff's fictitious letters of recommendation to that year's commencement audience."

After working briefly on a ship, Wolff joined the U.S. Army in 1964. He spent a year learning Vietnamese, and then served in Vietnam as a paratrooper. Out of these experiences came his second memoir, In Pharaoh's Army: Memories of the Lost War (Knopf, 1994), which was a finalist for the National Book Award. After his discharge, he enrolled in Hertford College of Oxford University, where he earned a degree in English. In 1975, he earned a master's degree in English from Stanford University, where he was also awarded a Wallace Stegner Fellowship in Creative Writing. In the meantime, he did stints as a waiter, night watchman, high school teacher at a Catholic school for boys, and reporter for The Washington Post during Watergate. "My desk was right next to Carl Bernstein's, and he was showing me some of the unbelievable stuff he and Woodward were coming up with. It was very exciting" (Boston Review).

Wolff taught at Syracuse University in New York from 1980 to 1997. The novelist Richard Ford and the short-story writer Raymond Carver were among his friends and colleagues. Since 1997, Wolff has taught English and creative writing at Stanford University, where he holds the Ward W. and Priscilla B. Woods professorship in the School of Humanities and Sciences. "I'd always thought that as soon as I made enough money to give up teaching and just write, I would," Wolff told the Boston Review. "But I'd become addicted to the company of writers and people who cared about learning and literature. I couldn't live like Salinger, for example, and shut myself up alone. I needed that intellectual friction, and I liked the sense of helping younger people along in their work." Known for his short story collections as well as his novels and memoirs, Wolff has received such honors as the PEN/Faulkner Award for Fiction, the Rea Award for the Short Story, three O. Henry Prizes, two National Endowment for the Arts creative writing fellowships, and a 2014 National Medal of Arts from President Barack Obama.

Wolff has been married to his wife since 1975. They have two sons and a daughter. "I find that all the best things in my life have come about precisely through the things that hold me in place: family, work, routine, everything that contradicts my old idea of the good life," Wolff told The Paris Review. "It's the gravity of daily obligations and habit, the connections you have to your friends and your work, your family, your place, even the compromises that are required of you to get through this life. The compromises don't diminish us, they humanize us."