Can’t We Talk About Something More Pleasant?

Can’t We Talk About Something More Pleasant?, written by Roz Chast, a longtime cartoonist for the New Yorker, is a “tour de force” (Elle), “remarkable” (San Francisco Chronicle), “revelatory” (Kirkus), “deeply poignant and laugh-out-loud funny” (New York Times), and “one of the great autobiographical memoirs of our time" (Buffalo News). A finalist for the National Book Award and winner of the Kirkus Prize, the National Book Critics Circle Award, and the Books for a Better Life Award, the memoir tells the story of Chast’s parents’ final years through cartoons, family photos, found documents, and narrative prose. “So many have faced (or will face) the situation that the author details, but no one could render it like she does” (Kirkus). “Anyone who has had Chast’s experience will devour this book and cling to it for truth, humor, understanding, and the futile wish that it could all be different" (St. Louis Post-Dispatch). “I want to recommend it to everyone I know who has elderly parents, or might have them someday" (Milwaukee Journal Sentinel).

"If you can pass the job on to someone else, I'd recommend it. If not, you have my total sympathy." — from Can’t We Talk About Something More Pleasant?

“Between their one-bad-thing-after-another lives and the Depression, World War II, and the Holocaust, in which they’d both lost family…who could blame them for not wanting to talk about death?” – Roz Chast in Can’t We Talk About Something More Pleasant?

Roz Chast’s parents were in their mid-90s, living in the same run-down Brooklyn apartment they’d been in for 48 years and where Chast grew up, when her mother’s physical health and father’s mental state necessitated a change. “Gut-wrenching and laugh-out-loud funny” (Milwaukee Journal Sentinel), Chast’s memoir, Can’t We Talk About Something More Pleasant?, is a mix of four-color cartoons, family photos, sketches, found documents, and narrative storytelling that chronicles the conflicting emotions, memories, and practical challenges of her parents’ last years and passing.

With chapter titles like “The Beginning of the End,” “The Elder Lawyer,” and “Kleenex Abounding,” Chast’s humor guides us through events all too familiar to many Americans, from cleaning out the detritus of her parents’ cluttered apartment to the sudden learning curve and anxiety associated with wills, health-care proxy and power-of-attorney forms, end-of-life directives, assisted-living costs, and weird cravings for tuna fish sandwiches. “Her idiosyncratic cartoonist’s style cocoons this profound story of suffering in laughter,” noted the National Book Foundation. The book comes to life “in vivid layers of anxiety, guilt, grime, humor, love, and sadness.”

The memoir begins with Chast going back after a long hiatus to check in on her parents in Brooklyn—“not the Brooklyn of artists or hipsters,” she explained, but the Brooklyn of “smelly hallways and neighbors having screaming fights” and “people who have been left behind by everything and everyone.” Her mother, Elizabeth, was built like a peasant, she’d say: short, solid, and strong. A former assistant principal in an elementary school, she was decisive, domineering, unafraid to make enemies, and prone to loud, angry outbursts she called “a blast from Chast,” especially toward her husband and daughter.

Chast as a child was more like her father, George, a gentle, easily distracted man and a chronic worrier. He was a high school French and Spanish teacher who also spoke Italian and Yiddish and loved words and languages, but he couldn’t handle simple everyday tasks. He never learned to drive or swim, and never used the stove except to boil water for tea. Whereas Chast’s mother had a thick skin, he did not and was intimidated by his wife, most often doing what she told him to do.

Born ten days apart and married in 1938, her parents did everything together in a rhythm all their own. Their concept of “being happy,” wrote Chast, quoting her mother, “was for modern people or movie stars. I.e., degenerates.” They were frugal and at home amidst a half-century buildup of saved articles: a drawer of pencils; piles of defunct bank books; and a closet full of old galoshes, fly swatters, tattered bathrobes, and broken manual typewriters.

It was a need to look into this closet that caused Elizabeth to fall off a ladder and end up in the hospital. Chast takes her father back to her home in Connecticut to look after him during her mother’s absence, but he becomes disoriented and increasingly frantic about mundane and sometimes imaginary worries. When it becomes clear that her parents can’t go on living as they had been for decades, Chast begins the journey of moving them into an assisted living facility; the “massive, deeply weird, and heartbreaking job” of going through their possessions; and preparing for their long and expensive decline. “We don’t deal with death in this society,” said Chast. “We pretend it doesn’t exist. Crank up the Muzak and spray the whole topic with room freshener” (GeriPal).

Chast’s best coping mechanism through it all was to draw and take notes. “Cartoons, as it happens, are tailor-made for the absurdities of old age, illness and dementia, the odd dramas and grinding repetition expertly illustrated by copious exclamation points, capital letters and antic drawings” (New York Times). Her lines, in both her words and drawings, are jittery “like a very old person’s voice” or a “polygraph having a nervous breakdown” (Boston Globe).

Writing this book, said Chast, was not cathartic. “I didn’t write it for catharsis. I think, especially with my parents, I wanted to remember who they were” (PBS). “I hope it comes across that my feelings for them were complex, but that I do think of them as amazing people. I wanted a different kind of relationship with my mother, but it was too late for that. I wrote the book to help those going through this, and to make them feel they’re not alone. You do get through it” (Publishers Weekly). 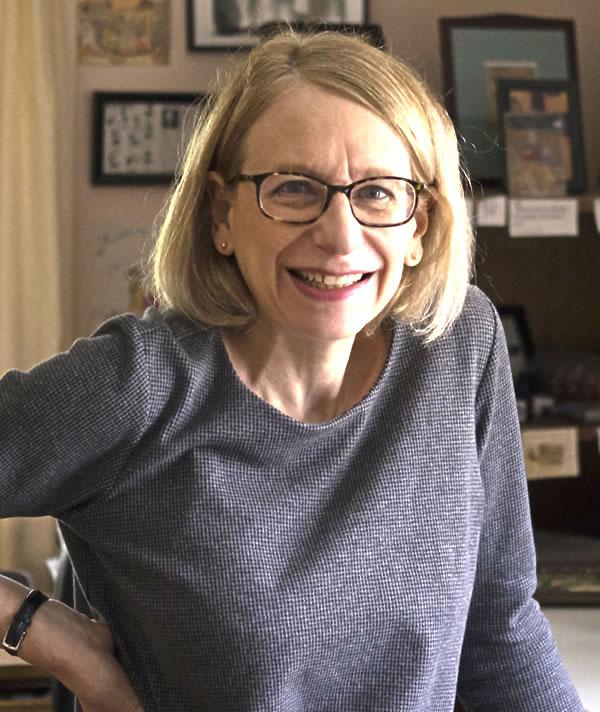 Roz Chast feels a great deal of anxiety about—among other things—balloons, elevators, quicksand, and alien abductions (What I Hate: From A to Z, Bloomsbury, 2011). She loves birds, including her pet African grey parrot named Eli, a misnamed female, whose vocabulary of words and phrases includes “Look, dammit!” and “You’re fired!” (New York Times) She likes supermarket cans that advertise unusual contents, like squid, which she collects and displays on a shelf in her writing/drawing studio in her Connecticut home. Fond of crafts, she has painted pysanky (Ukrainian decorated eggs), dabbled in the art of origami, designed dishes, and embroidered rugs depicting portraits of her late parents. She’s not a fan of Halloween, particularly since her husband, the humor writer Bill Franzen, created an elaborate and creepy spectacle in their front yard for many years that attracted so many visitors the police had to close down the street. It was like “watching an asteroid slowly head toward your planet,” said Chast (Wall Street Journal). She also really doesn’t like carnivals.

Many of Chast’s strong opinions and phobias can be traced back to her childhood in the Flatbush section of Brooklyn, New York. Instead of Victorian mansions, she said, her neighborhood had “gas stations, junk stores” and women sitting on beach chairs “making faces at you as you walked by” (Boston Globe). She was an only child who, in elementary school, “would make up math tests and give them out to kids in class for fun,” and was a self-described shy, awkward, and paranoid teenager (Comics Journal). "The formative book of my youth was the Merck Manual. I knew that ‘sore throat’ was not mere ‘sore throat’ but leprosy…. I was terrified of lockjaw. Every week I would learn a new disease to be afraid of" (CBS News).

She loved to draw and found solace and inspiration in MAD magazine, which made fun of popular culture in a way that no one else was doing at the time; the macabre, yet deeply hilarious cartoons of Charles Addams; and underground comics like Zap! that featured the work of R. Crumb. While in high school, she took drawing classes at the Art Students League in New York City and drew all the time until she left home for college at the age of 16, beginning as an art major at Kirkland College in upstate New York and ending up at the Rhode Island School of Design (RISD). She graduated with a BFA in painting from RISD in 1977. “The mid-1970s was not a great time to be a cartoonist if you were at RISD. Trying to get people to laugh was considered sort of terrible—almost tacky,” said Chast. “The quintessential work of that era would be a video monitor with static on it being watched by another video monitor, which would then also get static. Doing stories or anything ‘jokey’ made me feel like I was speaking an entirely different language” (Comics Journal).

She never thought she’d be able to make a career of drawing cartoons, but in 1978 she sold her first cartoon to the New Yorker and has continued to contribute cartoons to its pages and covers, as well as other magazines, ever since. "She was one of the few cartoonists who immediately seemed important to us,” Lee Lorenz, the magazine's cartoon editor at the time, told the Boston Globe. She caused a big uproar, he added. “They didn’t get it.” Added Chast, “Lee told me that when my cartoons first started running, one of the older cartoonists asked him if he owed my family money” (Comics Journal). "Roz invented her own language, which is what geniuses do,” said David Remnick, editor of the New Yorker. “James Joyce comes along and the novel changes forever; Schoenberg comes along and music is never the same; Bob Dylan comes along, the popular song is never the same. Roz Chast has her own language and her own look" (CBS News).

In 1990, Chast moved to the Connecticut suburbs, where she raised her son and daughter and continues to work at home on her weekly cartoons and various art projects. She has authored several books, including Theories of Everything: Selected, Collected, and Health-Inspected Cartoons, 1978-2006 (Bloomsbury, 2006); the children’s books Too Busy Marco (Atheneum, 2010) and, in collaboration with the comedian Steve Martin, The Alphabet from A to Y with Bonus Letter Z! (Flying Dolphin, 2007); Going Into Town: A Love Letter to New York (Bloomsbury, 2017); and Can’t We Talk About Something More Pleasant? (Bloomsbury, 2014), a National Book Award finalist and winner of a National Book Critics Circle Award, Kirkus Prize, Reuben Award, and Books for a Better Life Award. A recipient of the Heinz Award for Arts and Humanities and the New York City Literary Award for Humor, Chast holds honorary doctorates from Pratt Institute, Lesley University, and Dartmouth College.

“The wonderful thing about the cartoon form is that it’s a combination of words and pictures,” Chast told the Norman Rockwell Museum in Stockbridge, Massachusetts, one of several galleries around the country that has exhibited her work. “You don’t have to choose, and the two are often greater than the sum of their parts.” Take, for example, one of her much-loved cartoons published in the New Yorker in 1997 showing a man on an urban sidewalk holding a sign that says, “The End is Near.” Next to him is a woman who appears to be his wife. Her sign says, “You Wish.”