Are you familiar with the American poet Emily Dickinson but haven’t read her poems? Have you seen a film or play about her, or heard some contemporary artists mention how much they’ve been influenced by her and wondered: why all the hoopla? Did you read her poems in school but haven’t revisited them since? Or are you a fan who would jump at any chance to read her poems again and talk about them? The Essential Emily Dickinson—a compact anthology of poems, just 80 pages in length—is an inviting (re)introduction to the work of this celebrated, frank, passionate, sometimes playful, intensely private 19th century poet. Selected and introduced by the author Joyce Carol Oates, the collection presents more than 100 of Dickinson’s most famous poems and some lesser known poems—some only four lines long—to showcase the poet’s range: her “bold imagery, energy, wit, mimicry of child’s speech, dream babble, quicksilver moments…. This is Dickinson ‘at the white heat’ of ecstasy and its sister, despair, and she continues to hold us in awe” (Emily Fragos in the Boston Review).

"I find ecstasy in living—the mere sense of living is joy enough." —from The Letters of Emily Dickinson

“Dickinson has written as frankly of despair and the terror of spiritual collapse as any poet who has ever written….” – Joyce Carol Oates in her introduction

“‘Hope’ is the thing with feathers –” (p. 11), “Because I could not stop for Death –” (p. 53), and “I’m Nobody! Who are you?” (p. 13) are some of Emily Dickinson’s most memorable opening lines in American poetry, yet these and most of her other poetic lines were virtually unknown during her lifetime, as she saw only ten of her poems published. “Though it was known among her family and friends that Emily Dickinson had written poems much of her life,” writes Joyce Carol Oates in her introduction to The Essential Emily Dickinson (Ecco, 1996), “the size of the cache discovered by her sister Vinnie after Dickinson’s death astonished everyone: 1,775 poems of varying degrees of completeness and legibility, some of them scribbled on the backs of bills.” Oates explains that it was Dickinson’s practice to “write on scraps of paper that accumulated in her apron pockets during the course of a day, to be artfully assembled at night in the privacy of her room.”

Similarly prolific, Oates has published more than 50 books of fiction, nonfiction, and poetry (albeit during her own lifetime). She is our guide to, and curator of, this wide-ranging collection of poems by Dickinson who, says Oates, “never shied away from the great subjects of human suffering, loss, death, even madness,” yet could also be “subversively playful” with a “mordent sense of humor.” “Dickinson discovered, in adolescence, her distinctive voice, and the energies out of which she writes both poetry and prose are inclined to be romantically adolescent and rebellious; at once self-effacing and self-declaring.” Dickinson wrote often of death and immortality, as she was “literally surrounded by death from childhood onward,” Oates explains, but her poetry is also filled with the insightful happiness of a woman who had loved deeply and who relished the beauty of nature.

Known for her original metaphors and unexpected syntax, Dickinson’s poetry sometimes reads like a riddle. She regularly employs paradox—a statement that seems like a contradiction but actually is not—in order to get at the truth from an unpredictable angle. Although she was not conventionally religious, her poetry often borrows the metrical patterns of the hymns and psalms of her childhood. She also uses punctuation—such as her characteristic dash—and the capitalization of nouns to emphasize her ideas. She rarely wrote a poem of more than 20 lines, and this brevity itself suggests her view of poetry: that it should stun and surprise and ultimately please the reader. “The very look of many of Dickinson’s poems on the page is revolutionary,” writes Oates. “Her seemingly breathless pauses and dashes, her odd, Blakean capitalizations, her disjointed phrases and radical variants of rhyme, rhythm, cadence—all point to a poet of unique, unnerving gifts.” 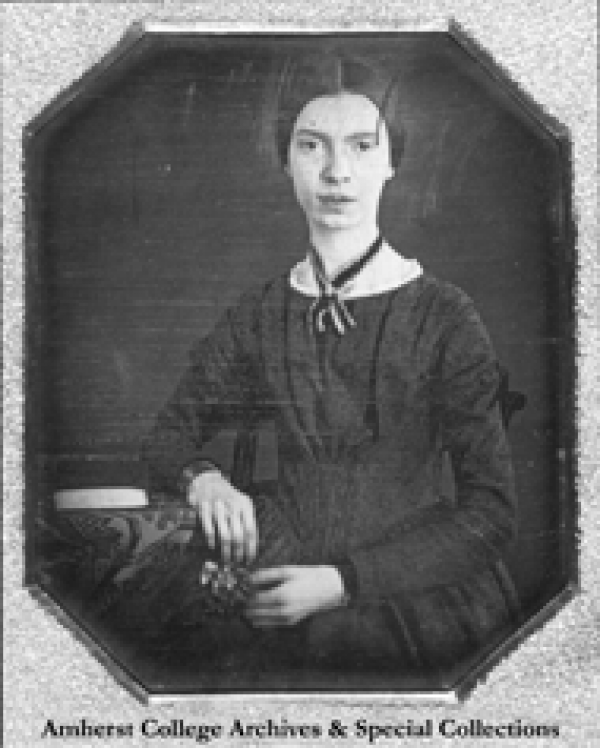 Used with permission of the Emily Dickinson Museum

Emily Dickinson, the middle child of Edward and Emily Norcross Dickinson, was born on December 10, 1830, in the family house (called the Homestead) on Main Street in Amherst, Massachusetts.

The crowded house and Edward’s growing legal and political career soon called for new quarters, and when Emily was nine years old, her family purchased a house on what is now North Pleasant Street in Amherst. Close to her older brother Austin and younger sister Lavinia, Dickinson had a fond attachment to the house on Pleasant Street. Domestic duties like baking and gardening occupied her time, along with school, church activities, reading books, learning to sing and play the piano, writing letters, and taking nature walks to collect wild flowers that she pressed into an album called her “herbarium.”

Dickinson’s formal schooling was exceptional for a girl in the early nineteenth century, though not unusual for girls in Amherst. After a short time at an Amherst district school, she attended Amherst Academy for about seven years before entering Mount Holyoke Female Seminary (now Mount Holyoke College) in 1847. She stayed at the Seminary for one year, the longest time she ever spent away from home.

In Dickinson’s early 20s, writing became increasingly important to her. Letters to her older brother Austin reveal a growing sense of “difference” between herself and others: “What makes a few of us so different from others? It’s a question I often ask myself” (April 21, 1853). This sense of separation became more pronounced as she grew older and her poetic sensibilities matured. By 1855, the family returned to the Homestead, where Dickinson had her own upstairs room and developed her passion for gardening. That same year, Edward Dickinson’s service in the House of Representatives brought the poet to Washington, DC—one of her only trips away from Amherst.

Although Emily Dickinson’s calling as a poet began in her teens, she came into her own as an artist later, during a short but intense period of creativity that resulted in her composing, revising, and saving hundreds of poems. That period, which scholars identify as 1858–1865, includes many passionate love lyrics and three poetic letters to the mysterious person she calls “Master,” and overlaps with the most significant event of American 19th-century history, the Civil War.

In her early 30s, Dickinson underwent treatments for a painful eye condition, now thought to be iritis—sensitivity to light. While under the care of Henry W. Williams for seven months in 1864 and six months in 1865, she boarded with her cousins, Frances and Louisa Norcross in Boston.

After these visits and treatments, Dickinson’s lifestyle further developed into the one that we mythologize today—a more reclusive, quiet existence. Although she rarely ventured beyond the Homestead, she did entertain several significant visitors, including the famous essayist and social reformer Colonel Thomas Wentworth Higginson, whom she finally met in 1870 after a long correspondence when he visited her at home in Amherst.

Dickinson’s adult life was marked by the illness and death of friends and loved ones, including her father, who died in 1874, and her mother, in 1882. Her friendship with Judge Otis Phillips Lord resulted in a marriage proposal that she turned down in 1882; he died two years later. The poet became ill herself shortly after her eight-year-old nephew died—as she wrote to a friend late in 1883, “The Crisis of the sorrow of so many years is all that tires me.” She remained in poor health until she died at age 55 on May 15, 1886. She was buried four days later in the town cemetery, now known as West Cemetery.

The Homestead and The Evergreens

Used with permission of the Emily Dickinson Museum

In 1855, Emily Dickinson moved with her family back to “the Homestead,” the house in Amherst where she had been born and lived her first nine years. Her father purchased the home in early 1855 and made significant renovations to it. In 1856, the Homestead became part of an enhanced Dickinson estate when Dickinson’s adored older brother, Austin, married her close friend Susan Huntington Gilbert, and Edward Dickinson built the couple a home next door known as the Evergreens.

That household was a lively nexus for Amherst society, and Dickinson herself took part in social gatherings there early in Austin and Susan’s marriage. Their lifestyle eventually would contrast markedly with her own more reclusive manner. The couple’s three children—Ned, born in 1861; Martha, in 1866; and Gilbert, in 1875—brought great joy to Emily’s life. In addition to providing close proximity to her brother and his family, the renovated Homestead offered Dickinson several other advantages. Her father added a conservatory where Emily could engage year-round in her beloved hobby of gardening and raise climate-sensitive plants.

Perhaps most importantly, Dickinson had a room of her own, the southwest corner bedroom on the second floor, a space essential to her writing. The two Dickinson daughters, who never married, remained at the Homestead for the rest of their lives. After Emily’s death in 1886, Lavinia lived on at the Homestead until she died in 1899, championing the publication of her sister’s poetry.

Today both houses are open to the public year round.

Source material from the Academy of American Poets.