Everything I Never Told You

National Endowment for the Arts creative writing fellow Celeste Ng grew up in Pennsylvania and Ohio in a family of scientists. A graduate of Harvard, she knocked it out of the park with her debut novel, Everything I Never Told You, which was a New York Times Book Review Editor's Choice and Amazon #1 Best Book of 2014; winner of the American Library Association's Alex Award and the Asian/Pacific American Award for Fiction; and named a best book of the year by more than a dozen publications, including National Public Radio, Entertainment Weekly, School Library Journal, and The Huffington Post. A gripping page-turner and striking family portrait, the novel follows a Chinese American family in 1970s small-town Ohio as they try to understand the death of the oldest daughter, Lydia. It explores "alienation, achievement, race, gender, family, and identity—as the police must unravel what has happened to Lydia, the Lee family must uncover the sister and daughter that they hardly knew.... Achingly, precisely, and sensitively written" (Amazon.com). Writes The New York Times Book Review: "If we know this story, we haven't seen it yet in American fiction, not until now."

"Lydia is dead. But they don’t know this yet." —from Everything I Never Told You

"Cultural issues don't have to be a barrier, but you can't pretend they're not there." — Celeste Ng in HIPPO Reads

In a small town in Ohio in 1977, the oldest daughter and favorite child of a biracial couple — her mother is white, her father is Chinese-American — is found drowned in a lake. As her parents and siblings struggle to solve the mystery of her death, a web of family secrets emerge to reveal how fragile the relationships between husband and wife, parent and child, and brother and sister can be when ambitions are thwarted, societal pressures mount, and fears and desires are kept buried. Celeste Ng's debut novel Everything I Never Told You (Penguin Press, 2014) alternates between past and present and is told from the various perspectives of each grieving member of the family, all of whom come to realize in their own way how little they knew about the people they thought they knew best.

Sixteen-year-old Lydia is the daughter of Marilyn and James Lee. She has her mother's blue eyes and her father's jet-black hair and makes them proud with how effortlessly it seems that she can fulfill the dreams that they were unable to pursue themselves. For Marilyn, the dream is to see her daughter become a doctor rather than a homemaker. As a young woman in the late 1950s attending college and working toward a medical degree in a predominantly male program, Marilyn felt like an outsider. Marilyn's mother encouraged her to leave school and find a husband, but when Marilyn informed her of her choice to marry a Chinese-American man, her mother disapproved and their relationship deteriorated. Marilyn was later forced to give up her dream of becoming a doctor when she became a mother. For James, the dream is to see Lydia popular at school with a busy social life, something James never experienced himself as a Chinese-American.

When Lydia's body is found in the lake, the delicate balance keeping the Lee family together is destroyed. James, consumed with guilt, sets out on a reckless path that may destroy his marriage. Marilyn, devastated and vengeful, is determined to find the responsible party no matter the cost. Lydia's older brother, Nathan—who was close with his sister but is headed off to college with his own dreams of becoming an astronaut—is certain that the neighborhood bad boy, Jack, is somehow involved. But it's the youngest of the Lee family, Hannah, who observes more than anyone realizes and who may be the only one who knows the truth about what happened. "Within a family, secrets carry extra weight," Ng told Goodreads. "Part of what drew me to this story was thinking about all the questions the family members would never have answered, and the ways that we often try to reconstruct—or reimagine—those we have lost."

Everything I Never Told You was a New York Times bestseller, Amazon's #1 Best Book of 2014, and named a best book of the year by over a dozen publications. It won the Massachusetts Book Award, the Asian/Pacific American Award for Literature, the American Library Association's Alex Award, and the Medici Book Club Prize. Rights have been sold to translate the novel into 20 languages. Ng took six years to write it and produced four different drafts of the novel before she sold it to her publisher. The hardest part, she said, was structuring the story. "There's a long bulletin board in my office, and at one point the whole thing was covered in 3x5 cards, all color-coded and laced with string as I tried to work it out" (Fiction Writers Review).

The idea for the novel came in part from an anecdote Ng's husband told her. "When he was a kid, a boy he knew pushed his own little sister into a lake," she told One Story. "She was rescued, but I started wondering what it might have been like for her to plunge underwater, what this brother-sister dynamic might have been like (both before and after), and what would have happened in her family if she hadn't been saved." Ng was also interested in exploring the dysfunction that can befall a family with poor communication. "Sharing a thought with another person is a leap of faith: you have to trust that they'll hear what you're saying," she said. "The bigger the dream or the more pressing the fear, the higher the stakes. Maybe that fear is what makes us hide things from those we love: trying to say something, and having them (of all people) not understand, can be more painful than staying silent" (Shelf Awareness).

Ng chose to set the novel in the 1970s because it was "a time when the issues the Lees wrestle with were all thrown into relief" (Goodreads), including the hardships mothers faced in wanting careers and the lack of acceptance of interracial marriages, which, in 1958 when Marilyn and James married, were still illegal in some states. The Supreme Court struck down interracial marriage bans in 1967 but, according to a Gallup poll, 1997 was the first year that a majority of Americans said that they approved of such marriages. In doing research for the novel, Ng also found a 2001 landmark study by the Anti-Defamation League and other organizations that showed that 68% of US citizens had a negative view of Asian-Americans. "The sad truth," said Ng, "is that with one exception, every example of racial discrimination in the novel is something that's actually happened at some point to me, my family, or others I know personally" (cleveland.com). "My own marriage is interracial," she explains, "so these issues are very much on my mind. As interracial marriages become more common, I hope that attitudes will be very different a generation from now" (HIPPO Reads). 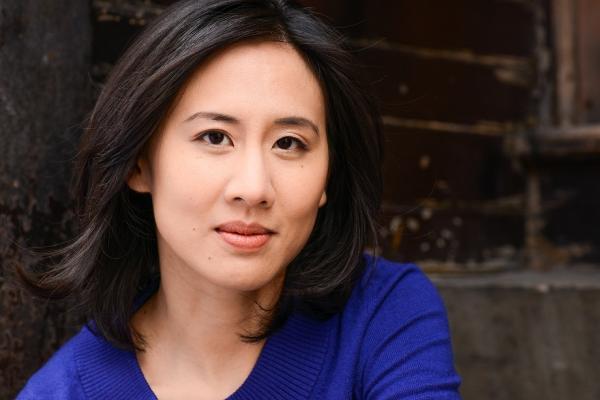 "Can we ever really understand our children? Our parents? I want the answer to be yes." — Celeste Ng in Omnivoracious

Celeste Ng—pronounced "ing"—was born in Pittsburgh, Pennsylvania, and moved just before she turned ten to Shaker Heights, Ohio—both areas that had few Asian Americans. "In my elementary school," said Ng, "I was the only Asian girl and one of only two non-white students" (Omnivoracious). Ng's parents moved to the U.S. from Hong Kong in the late 1960s. Her father, who passed away in 2004, was a physicist for NASA; her mother was a chemist who taught at Cleveland State University. As a child, Ng was an avid reader—one of her favorite books growing up was Louise Fitzhugh's Harriet the Spy—and had dreams of being an astronaut. "I was the (much) youngest child and spent a lot of time listening in on conversations, trying to piece together the lives of my elders," she told One Story. "I collected objects that were unwanted by others but that were deeply significant, almost totems, to me. In fact, I still do. And as a kid I loved finding cozy nooks to hide in—under tables, on window seats behind the curtains, in closets."

Ng's parents had high expectations when it came to academics. "If I brought home an A, they were like, 'Well, great! Next time maybe you should try and work harder and get an A-plus,'" Ng told Kirkus Reviews. "Whether that shaped my personality or just matched my goody-two-shoes, overachiever personality, I don't know." They were supportive of her decision to pursue the arts, which were vibrant in her progressive community of Ohio. Ng was coeditor of her school's literary magazine and wrote a play in her senior year that was produced at a local theater as part of a kids' playwriting festival. "I didn't realize until after I left what an unusual place [Shaker Heights] is," said Ng, describing aspects of her public high school that include creative writing courses, a theater program, and a planetarium. Growing up there "made me conscious of race, in the best possible way. I was part of the Student Group on Race Relations for three years in high school, where we visited elementary school classrooms to talk about things like discrimination and stereotyping" (cleveland.com).

Though Shaker Heights had few Asian American families, it was racially diverse compared to most other American towns, which is why her parents chose to live there. "My family celebrated Chinese holidays and ate Chinese food, but we also went to Wendy's (my dad's favorite), watched Disney movies and had cookouts on July 4th," she said. "Straddling two cultures is strange. I was often acutely conscious of being Chinese, but when I went to San Francisco or Hong Kong, I was acutely conscious of how un-Chinese I was. That's partly why I'm interested in writing about outsiders" (Shelf Awareness).

Ng attended Harvard University and earned her MFA in creative writing from the University of Michigan. She is a National Endowment for the Arts creative writing fellow, served as blog editor for the website Fiction Writers Review for three years, and has taught writing classes at Grub Street, a literary center in Boston near where she lives with her husband and young son in Cambridge, MA. Ng gave birth to her son while she was revising her manuscript that would become her first novel, Everything I Never Told You (Penguin Press, 2014). Motherhood "made revising the scenes where [the parents] grieve their daughter very painful to write, much more than I'd expected," she told Fiction Writers Review. "I would sometimes write at night and then sneak into my son's room to hug him and just watch him breathe for a while." Ng’s second novel, Little Fires Everywhere (Penguin), was published in 2017 and quickly became a New York Times bestseller. It was Amazon’s #2 best book and best fiction book of 2017, winner of the Goodreads Readers’ Choice Award 2017 in Fiction, and was named the best book of the year by over 25 publications.

Ng has always loved writing, but not until after graduate school did she fathom that it was something she could do professionally. The only way she could get through writing the first draft of Everything I Never Told You was to tell herself that no one would ever read it (Omnivoracious). "It's a little like dancing around like a nut in your apartment and then realizing the curtains are open and people are watching: oh my god, people can see me!" (Fiction Writers Review). Writes The Independent (Ireland), "Let's hope Ng decides to tell us another story again soon."

Source material for Everything I Never Told You discussion questions provided courtesy of Penguin Random House.