The Grapes of Wrath

John Steinbeck's The Grapes of Wrath is not merely a great American novel. It is also a significant event in our national history. Capturing the plight of millions of Americans whose lives had been crushed by the Dust Bowl and the Great Depression, Steinbeck awakened the nation's comprehension and compassion.

Written in a style of peculiarly democratic majesty, The Grapes of Wrath evokes quintessentially American themes of hard work, self-determination, and reasoned dissent. It speaks from assumptions common to most Americans whether their ancestors came over in a stateroom, in steerage, or were already here to greet the migrants.

"Literature is as old as speech. It grew out of human need for it, and it has not changed except to become more needed." —from Steinbeck's Nobel Prize speech

John Steinbeck's The Grapes of Wrath is not merely a great American novel. It is also a significant event in our national history. Capturing the plight of millions of Americans whose lives had been crushed by the Dust Bowl and the Great Depression, Steinbeck awakened the nation's comprehension and compassion.

Written in a style of peculiarly democratic majesty, The Grapes of Wrath evokes quintessentially American themes of hard work, self-determination, and reasoned dissent. It speaks from assumptions common to most Americans whether their ancestors came over in a stateroom, in steerage, or were already here to greet the migrants.

Can a book top the bestseller list, win a Pulitzer Prize, save lives, and still be underrated? If that book is The Grapes of Wrath (1939), the answer is most definitely yes. For too long, Steinbeck's masterpiece has been taught as social history, or dismissed as an "issue novel." It's both these things, of course, but before all that, it's a terrific story. The characters fall in love, go hungry, lose faith, kill, live, and die with an immediacy that makes most contemporary novels look somehow dated by comparison.

The novel begins with young Tom Joad's return home from a prison term to find his family's Oklahoma farmstead in ruins and deserted. He soon locates his relatives nearby, preparing to leave their land for the promise of a new life in California. We follow their travails and partake of their hopes, only to share in their disappointment when California's agricultural bounty makes no provision for them except as occasional day laborers. Under the strain, the Joad family gradually comes apart until only a struggling remnant survives. In an unforgettable conclusion, we leave these few bereft of everything except their imperishable humanity.

Along the way, we meet a cast of characters as overstuffed as the Joad family's panel truck. From the indomitable matriarch Ma Joad to the starving old man in the book's final scene, Steinbeck gives them the individuality that an unforgiving economy threatens to cost them. In a remarkable balancing act, they represent those displaced by the Depression without ever subsiding into mere symbols.

And that's only half the story. The Grapes of Wrath is at least two books in one. Roughly half the chapters tell the saga of the Joads, while the other half have no continuing characters, and hardly any named people at all. These "generals," as Steinbeck usually called his interchapters, emphasize the point that the Joads stood in for all the Depression-era westward migrants. He felt a greater sense of responsibility to his material in this book than any other, and he was determined that no reader mistake the Joad's travails for an isolated case.

Steinbeck wrote The Grapes of Wrath in an amazing five-month burst of productivity. His first marriage was starting to crack, and every day brought new entreaties from good causes to chair this committee or attend that benefit. In retrospect, the days that birthed the novel stand testament to perhaps its greatest theme: the dignity of hard work, done by hand and beset by doubt, with all one has, and for others to share.

Tom Joad
Just released from prison as the novel begins, Tom is quick to fight but fundamentally decent. He loves his family and finds himself gradually radicalized by its slow disintegration.

Ma Joad
Blessed with the ability to improvise a meal or a bed from the barest of provisions, Ma's strength and resilience ultimately prove her the true bulwark of the family.

Jim Casy
A defrocked preacher turned itinerant philosopher, Jim gives voice to much of Steinbeck's own mistrust of organized religion and belief in social justice.

Rosasharn Joad Rivers
Under Ma's influence, Tom's sister matures from a fairly insufferable expectant mother into a woman capable of one of the most memorable sacrifices in American literature.

Uncle John Joad
Uncle John is a sometime drunk who holds himself responsible for his late wife's death. His most memorable scene comes when he sets the youngest Joad adrift in the river to bear mute witness against the suffering of all the Dust Bowl migrants.

Al Joad
Al becomes suddenly indispensable to his family, since he's the only one who can keep their precious truck running. Unfortunately, some things are even more gripping to a teenage boy like Al than an automobile—for example, teenage girls.

The "man who lay on his back"
Never named, this minor but indelible character shares the novel's final, unforgettable tableau with Rosasharn. Like the prostrate underclass he represents, he needs help to survive but is too proud to beg.

How The Grapes of Wrath Got Its Name

"Battle-Hymn of the Republic"
by Julia Ward Howe

Mine eyes have seen the glory of the coming of the Lord:
He is trampling out the vintage where the grapes of wrath are stored;
He hath loosed the fateful lightning of his terrible swift sword:
His truth is marching on.

Julia Ward Howe (1819-1910) published her popular Union song, "Battle-Hymn of the Republic," in the Atlantic Monthly in 1862. Carol Steinbeck thought the first verse's phrase "the grapes of wrath" would be the perfect title for her husband's epic novel. 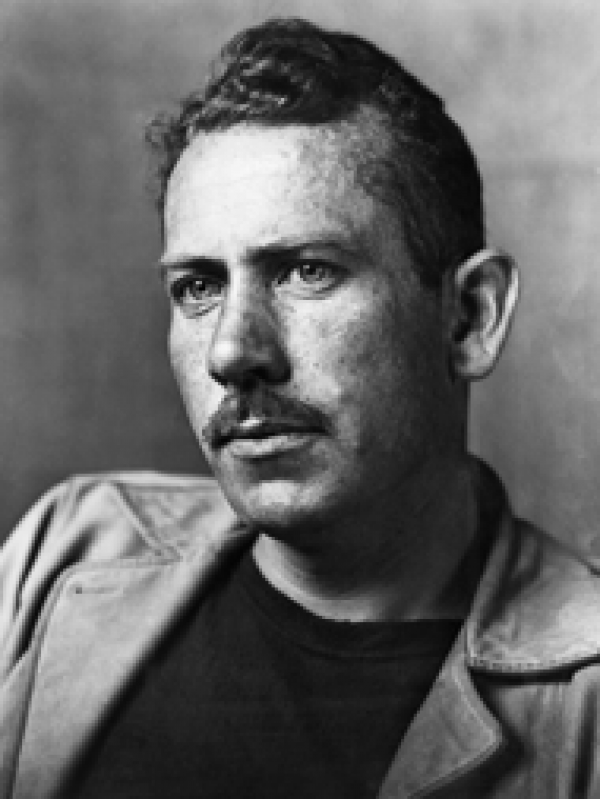 The California farm town of Salinas welcomed John Steinbeck into the world on February 27, 1902, but the welcome eventually wore out. From an early age, his schoolteacher mother imparted a love of learning and language. From his bankrupt father, Steinbeck acquired a hypersensitivity to social nuances, a profound empathy for the underprivileged, and a strong work ethic that rarely left him. After receiving his diploma from Salinas High in 1919, he alternated work as a field hand with sporadic attendance at Stanford University.

His fourth novel, Tortilla Flat (1935), made his name as a writer. Then, drawing on his strengths—deep regard for his native California and empathy for his fellow hard workers—Steinbeck spent years researching and a miraculous five months writing The Grapes of Wrath. Published in 1939, it won him both the Pulitzer Prize for fiction and decades of enmity from his hometown, where he was viewed as a traitor to his (middle) class.

In a span of three months between 1939–1940, critically and commercially successful films of both The Grapes of Wrath and the short novel Of Mice and Men came out. During World War II, the New York Herald Tribune signed him on as a war correspondent and he filed dispatches from England and the Mediterranean.

After the war, Steinbeck left California for New York and cast around for a subject that would engage him as fully as The Grapes of Wrath had. He divided his attention among science writing, journalism, screenplays, and shorter novels. Finally, in 1952, following the collapse of his second marriage and the sudden death of his beloved friend, marine biologist Ed "Doc" Ricketts, Steinbeck wrote his way imaginatively back to California for East of Eden, among his strongest and most enduring novels.

The 1962 memoir Travels with Charley freshened and deepened Steinbeck's already wide readership. The highest honors were given to him: the Nobel Prize for literature in 1962, the Presidential Medal of Freedom in 1964, and appointment to the National Council on the Arts in 1966.

Steinbeck died in New York City in 1968 and was buried with little fanfare in Salinas. Today, the handsome National Steinbeck Center anchors Salinas's downtown revival, complete with research library and a museum featuring the original camper truck from Travels with Charley. Migrants still pick most of the fruit in California's Central Valley, but they come from Central America instead of Oklahoma, and agriculture has a new partner driving the region's economy: literary tourism.

The Grapes of Wrath Audio Guide