The Great Gatsby may be the most popular classic in modern American fiction. Since its publication in 1925, Fitzgerald's masterpiece has become a touchstone for generations of readers and writers, many of whom reread it every few years as a ritual of imaginative renewal. The story of Jay Gatsby's desperate quest to win back his first love reverberates with themes at once characteristically American and universally human, among them the importance of honesty, the temptations of wealth, and the struggle to escape the past. Though The Great Gatsby runs to fewer than two hundred pages, there is no bigger read in American literature.

"Show me a hero and I will write you a tragedy." —from The Notebooks of F. Scott Fitzgerald

The Great Gatsby may be the most popular classic in modern American fiction. Since its publication in 1925, Fitzgerald's masterpiece has become a touchstone for generations of readers and writers, many of whom reread it every few years as a ritual of imaginative renewal. The story of Jay Gatsby's desperate quest to win back his first love reverberates with themes at once characteristically American and universally human, among them the importance of honesty, the temptations of wealth, and the struggle to escape the past. Though The Great Gatsby runs to fewer than two hundred pages, there is no bigger read in American literature.

F. Scott Fitzgerald's 1925 novel The Great Gatsby is a tragic love story, a mystery, and a social commentary on American life. Although it was not a commercial success for Fitzgerald during his lifetime, this lyrical novel has become an acclaimed masterpiece read and taught throughout the world.

Unfolding in nine concise chapters, The Great Gatsby concerns the wasteful lives of four wealthy characters as observed by their acquaintance, narrator Nick Carraway. Like Fitzgerald himself, Nick is from Minnesota, attended an Ivy League university, served in the U.S. Army during World War I, moved to New York after the war, and questions—even while participating in—high society.

Having left the Midwest to work in the bond business in the summer of 1922, Nick settles in West Egg, Long Island, among the nouveau riche epitomized by his next-door neighbor Jay Gatsby. A mysterious man of thirty, Gatsby is the subject of endless fascination to the guests at his lavish all-night parties. He is rumored to be a hero of the Great War. Others say he served as a German spy. Gatsby claims to have attended Oxford University, but the evidence is suspect. As Nick learns more about Gatsby, every detail about him seems questionable, except his love for the charming Daisy Buchanan.

Jay Gatsby's decadent parties are thrown with one goal: to attract Daisy, who lives across the bay in the more fashionable East Egg. From the lawn of his sprawling mansion, Gatsby can see the green light glowing on her dock, which becomes a symbol in the novel of an unreachable treasure, the "future that year by year recedes before us."

Though Daisy is a married socialite and a mother, Gatsby still worships her as his "golden girl." They first met when she was a young lady from an affluent family and he was a working-class military officer. Daisy pledged to wait for his return from the war. Instead she married Tom Buchanan, a wealthy classmate of Nick's. Having obtained a great fortune, Gatsby sets out to win her back again.

A profound indictment of class privilege in the Jazz Age and beyond, The Great Gatsby explores the conflict between decency and self-indulgence. In the novel's conclusion, the characters collide, leaving human wreckage in their wake.

"At his lips' touch she blossomed for him like a flower and the incarnation was complete."
— from The Great Gatsby

Nick Carraway
Nick, a young Midwesterner educated at Yale, is the novel's narrator. When he moves to the West Egg area of Long Island, he joins the lavish social world of Tom, Jordan, Gatsby, and his cousin Daisy.

Jay Gatsby
The handsome, mysterious Gatsby, who lives in a mansion next door to Nick's cottage, is known for his lavish parties. Nick, whom he trusts, gradually learns about Gatsby's past and his love for Daisy.

Daisy Buchanan
Beautiful, charming, and spoiled, Daisy is the object of Gatsby's love. Her caprice and materialism lead her to marry Tom Buchanan.

Tom Buchanan
From an enormously wealthy Chicago family, Tom is a former Yale football star who sees himself at the top of an exclusive social hierarchy. He is conceited, violent, racist, and unfaithful.

Jordan Baker
Daisy's friend Jordan epitomizes the modern woman of the 1920s. A liberated, competitive golfer, she is firmly established in high society. She both attracts and repels Nick as a romantic interest.

George Wilson
The owner of an auto garage at the edge of the valley of ashes, George finds his only happiness through his faithless wife, Myrtle.

Myrtle Wilson
Myrtle dreams of belonging to a higher social class than George can offer. Vivacious and sensual, she hopes her adulterous affair will lead to a life of glamour. 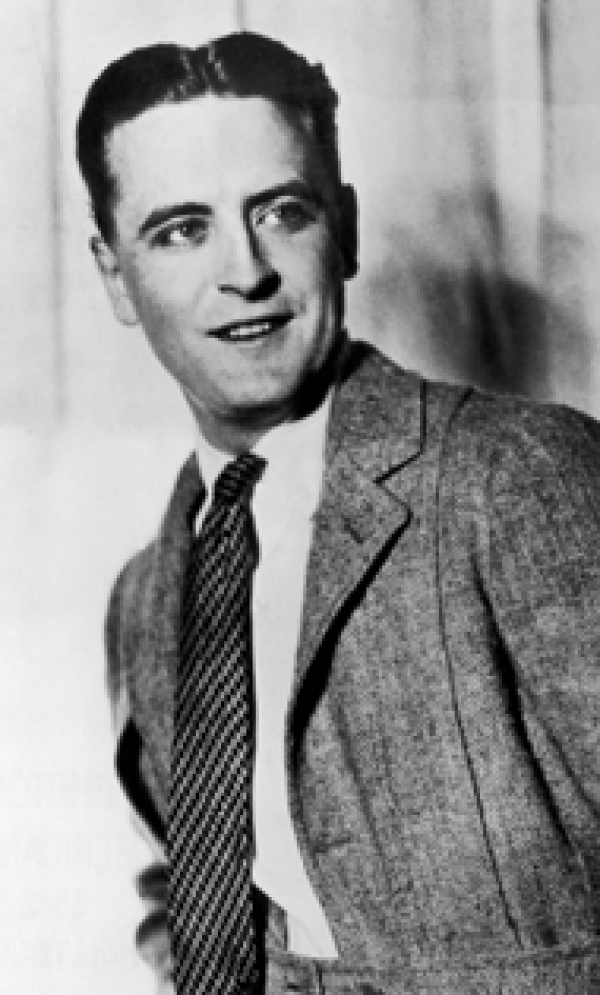 September 24, 1896: Into a family that traces its ancestry to the author of "The Star Spangled Banner," Francis Scott Key Fitzgerald is born in his parents' house on Laurel Avenue in St. Paul, Minnesota.

Although Fitzgerald's father went bankrupt, Fitzgerald still played with the rich kids in town. This paradox would later inform his fiction. His awareness of his situation sharpened during his years at Princeton, where he studied from 1913 to 1917 until he accepted a commission from the U.S. Army. He never saw combat. During World War I, Fitzgerald was stationed near Montgomery, Alabama, where he began revising what became his first novel, This Side of Paradise (1920). There he also met the love of his life, Zelda Sayre, the charming, mercurial daughter of a judge. Fitzgerald's early literary successes soon made him and Zelda celebrities of the Jazz Age—a term he coined. During the 1920s, Zelda served as his editor, confidante, and rival. Their appetite for excess made them notorious in an age when excess was the norm. The Fitzgeralds moved to France in 1924 with their young daughter, Frances (nicknamed Scottie), where they fell among a group of American expatriate artists whom the writer Gertrude Stein christened the Lost Generation. In 1925 publisher Charles Scribner's Sons came out with Fitzgerald's The Great Gatsby, which has become his most enduring work.

Fitzgerald would not publish another novel for nine years. In 1932, Zelda suffered a breakdown from which she never fully recovered. She spent most of her remaining days in mental institutions. Fitzgerald sold stories to The Saturday Evening Post and Esquire to keep financially afloat. Implicitly acknowledging his wife's mental illness and his own alcoholism, he drew on their life abroad in the novel Tender Is the Night (1934). Fitzgerald relocated to Hollywood in 1937 to write screenplays. His sole screen credit from this period is for the film Three Comrades (1938). It joins his other script credit, Pusher-in-the-Face (1929), from an earlier California stint.  Eventually Fitzgerald began sustained work on his novel The Last Tycoon (1941). Tragically, his end came before the book's did. Several chapters shy of finishing, Fitzgerald died of a heart attack in the apartment of his Hollywood companion, columnist Sheilah Graham, while eating a chocolate bar and listening to Beethoven's Eroica symphony.