The Heart Is a Lonely Hunter

It is hard to believe that The Heart Is a Lonely Hunter was the first book of a 23-year-old author (who had started the novel at 19!). This tragic, small-town drama is so ambitious in its scope—presenting five radically different characters whose troubled lives intersect in the Depression-era South—it always seems like the work of a master storyteller.

"In his face there came to be a brooding peace that is seen most often in the faces of the very sorrowful or the very wise."
—from The Heart Is a Lonely Hunter

Carson McCullers's The Heart Is a Lonely Hunter (1940) is set in a small Georgia mill town in the late 1930s. At the center, like the hub of a wheel, is John Singer, who rents a room in the Kelly house after his fellow deaf companion, Spiros Antonapoulos, is sent away to an asylum. The amiable Singer is a confidant for four of the town's misfits—Mick Kelly, a teenage girl who dreams of becoming a trained musician; Benedict Mady Copeland, the town's black doctor; Jake Blount, an alcoholic socialist; and Biff Brannon, the owner of the local café.

Each of these four characters regularly visits Singer, telling him about the injustices and pain in their lives. Each outcast believes that only Singer can understand his or her loneliness, although Singer reveals little of himself to them. He does, however, open himself to Antonapoulos through visits and letters. Singer even saves his hard-earned money to buy a movie projector for his friend.

Over the course of a year, the characters encounter difficult troubles and find solace in Singer. Mick drops out of school to help support her family after her younger brother accidentally shoots a little girl. Dr. Copeland has tuberculosis and his son, Willie, is sent to jail. New to town and friendless, Jake yearns to help the working class, but his alcoholism muddles his message and carries him toward self-destruction. Biff's wife dies, leaving him with a deeper longing to relate to his patrons, and sad that he doesn't have his own children. Not until the novel's startling climax do any of these lonely souls fully appreciate Singer's importance in their lives.

Whether quiet or roaring, deliberate or reckless, the five voices of The Heart Is a Lonely Hunter unite in a common cry of isolation, a theme that reverberates through McCullers's other works. Yet, a glimmer of hope remains. "All is serene," McCullers writes toward the end of her story—life is an old whistled tune, water pitchers are full of zinnias, and the morning sun will come again.

John Singer
John Singer is a deaf man who boards with the Kelly family and earns his living as a silver engraver. Though he is a confidant and comfort to Mick, Jake, Biff, and Dr. Copeland, Singer's silent suffering and desolate loneliness are perhaps the most poignant of all. He generously devotes himself to his compulsive deaf friend, Spiros Antonapoulos.

Mick Kelly
Thirteen-year-old Mick's passionate obsession with music fuels her desires. She spends hours listening to Singer's radio. A lonely tomboy, her fascination with Singer helps her cope with her poverty-stricken family. A summer picnic excursion with her Jewish friend, Harry Minowitz, only heightens her isolation.

Jake Blount
An itinerant alcoholic vacillating between violent tirades and drunken stupors, Jake arrives in town with a disorganized plan to begin a socialist revolt among the working class. He lands a job as a mechanic at the traveling carnival and often delivers long speeches about social injustices.

Benedict Mady Copeland
Although Dr. Copeland has practiced medicine for 25 years, he feels his occupation has frustrated his ambition to change the problems between whites and blacks. He is ill with tuberculosis, and his son Willie is violently abused in prison. His daughter, Portia, works for the Kelly family.

Biff Brannon
Biff is the owner of the town's New York Café and is a quiet, contemplative man with a keen eye for detail. Despite his great consideration for all his customers, he lacks affection for his wife, Alice. Unable to resolve inner conflicts, Biff is haunted by his inability to understand Singer.

Music in the Book

Carson McCullers once compared The Heart Is a Lonely Hunter to a three-part fugue—a technique in musical composition that evolved during the 17th century. A fugue begins with a single voice expressing a theme, which other distinct voices restate as they enter one at a time. Like a skilled conductor, McCullers understood that each voice must define itself while simultaneously enhancing those around it.

In the novel, Mick Kelly's voice most skillfully reflects McCullers's own passion for music. Mick's tenacious, yet failed attempt to construct a violin, and her determination to play piano despite "any amount of knocks and trouble" are apt symbols of McCullers's early, frustrated dreams of becoming a composer.

Mick's secret summertime pleasure is to find a house with a radio, tuned in to classical music, so she may sit below its open window and listen. On the evening of her ruined party, the program begins with Beethoven's Symphony No. 3 (Eroica). Mick is spellbound: "She could not listen good enough to hear it all. The music boiled inside her." When the symphony finishes, Mick is left with only a throbbing heart and "terrible hurt."

The novel's rhythmic language is sometimes harmonious—as in the sweet, sad duets between Mick and Singer—and at other times cacophonous, as in Jake and Dr. Copeland's final argument. But McCullers's prose also gives us silence—in Singer, and in what she leaves to our imagination.
In addition to most pieces composed by Wolfgang Amadeus Mozart and Franz Schubert, McCullers also loved:

"But all the time—no matter what she was doing—there was music. Sometimes she hummed to herself as she walked, and other times she listened quietly to the songs inside her. There were all kinds of music in her thoughts."
—Carson McCullers, from The Heart Is a Lonely Hunter 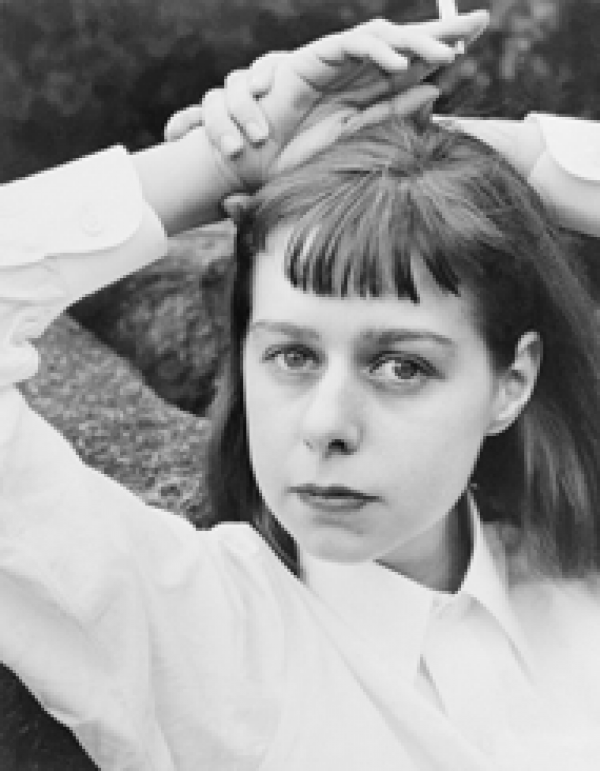 To know Mick Kelly—the precocious, dreamy heroine of The Heart Is a Lonely Hunter—is to know a young Carson McCullers, born Lula Carson Smith on February 19, 1917, in Columbus, Georgia.

A gangly, sensitive child, McCullers was painfully aware of her unpopularity among her peers. Her father, Lamar Smith, was a watch repairman who raised his family on modest means. Parties were agonizing ordeals for her. She wore dirty sneakers while other girls wore dainty heels. She escaped into music, sometimes playing her piano four or five hours a day. She dreamt of becoming a concert pianist until she endured her first bout of rheumatic fever at 15, and her ambition turned to the more sedate art of writing.

At 17, McCullers left Georgia for New York City, where she worked odd jobs and enrolled in writing classes. She was a restless, chronically ill young woman. During the Great Depression, her sympathies ran deep for the poor, the alienated, and the oppressed. More politically aware than politically active, McCullers expressed her views through her fiction.

She married James Reeves McCullers, a young, frustrated Marxist, at the age of 20, and by 23 she had completed her first novel, The Heart Is a Lonely Hunter. Shortly after it was published to wide critical acclaim in 1940, she became New York's new literary star. That she could write a bestseller so young was feat enough, but to have such depth and insight at her age was extraordinary.

McCullers moved around for much of her life, living at various times in Georgia, North Carolina, New York, Paris, and at Yaddo, an artists' retreat in upstate New York. She won international fame and nurtured intimate friendships with such luminaries as the American playwright Tennessee Williams. But to most, she remained an outsider. She wore men's pants and white dress shirts. She smoked incessantly, drank sherry or bourbon day and night, loved passionately, and lived with disarming honesty.

Despite her literary fame, she endured many personal troubles. Though she adored Reeves and remarried him after their divorce, theirs was a tumultuous relationship that ended in his suicide in 1953. By that time, years of pleurisy, pneumonia, rheumatic fever, and strokes had caught up to her. For the last 20 years of her life, she was paralyzed on her left side. She died of a massive cerebral hemorrhage on August 15, 1967.

Located in Brooklyn Heights on a bluff overlooking the East River, New York Harbor, and the Brooklyn Bridge, the house at 7 Middagh Street was a social and intellectual mecca for artists in the early 1940s, many of whom had escaped the war in Europe. Drawn to the wharves and warehouses of the waterfront, McCullers became one of three original tenants along with George Davis, then the fiction editor of Harper's Bazaar, and the poet W.H. Auden.

Dubbed the February House by the French writer Anaïs Nin when she discovered how many of its residents had February birthdays, the $75-a-month, ramshackle brownstone with the high-ceilinged parlor and marble fireplace garnered a reputation among the Manhattan elite for its brilliant dinner conversations and raucous parties. The days at the house were quiet, providing a sanctuary for those in need of literary inspiration and supportive company.

"Carson's heart was often lonely and it was a tireless hunter for those to whom she could offer it, but it was a heart that was graced with light that eclipsed its shadows."
—Tennessee Williams, 1974

The Heart Is a Lonely Hunter Audio Guide