To Kill a Mockingbird

Harper Lee's To Kill a Mockingbird is the rare American novel that can be discovered with excitement in adolescence and reread into adulthood without fear of disappointment. Few novels so appealingly evoke the daily world of childhood in a way that seems convincing whether you are 16 or 66.

"Writing is a process of self-discipline you must learn before you can call yourself a writer. There are people who write, but I think they're quite different from people who must write." —from a 1964 interview

Harper Lee's To Kill a Mockingbird is the rare American novel that can be discovered with excitement in adolescence and reread into adulthood without fear of disappointment. Few novels so appealingly evoke the daily world of childhood in a way that seems convincing whether you are 16 or 66.

Harper Lee's To Kill a Mockingbird begins at the end. The novel opens with the adult Jean Louise "Scout" Finch writing, "When he was nearly thirteen, my brother Jem got his arm badly broken at the elbow." By the time Jem finally gets around to breaking his arm more than 250 pages later most readers will have forgotten they were ever warned. This echoes the way the whole book unfolds—in no special hurry, with lifelike indirection. Nothing happens all by itself. The book's two plots inch forward along parallel tracks, only converging near the end.

The first plot revolves around Arthur "Boo" Radley, who lives in a shuttered house down the street from the Finches and is rumored to be some kind of monster. Scout, Jem, and their next-door neighbor Dill engage in pranks, trying to make Boo show himself. Unexpectedly, Boo reciprocates their interest with a series of small gifts, until he ultimately steps off his porch and into their lives when they need him most.

The second story concerns Scout and Jem's father, the attorney Atticus Finch. The local judge appoints him to defend a black man, Tom Robinson, who is falsely accused of raping a white woman. Atticus suspects he will lose the case, but he faces up to the challenge just the same, at one point heroically stepping between his client and a lynch mob.

Along with its twin plot lines, To Kill a Mockingbird has two broad themes: tolerance and justice. Lee treats the first through the children's fear of their mysterious neighbor. She illustrates the second with Atticus's courage in defending Robinson to the best of his ability, despite the racial prejudices of their small Southern town.

Tying the stories together is a simple but profound piece of advice Atticus gives Scout: "You never really understand a person until you consider things from his point of view.... Until you climb inside of his skin and walk around in it." By the end of the novel, Scout has done exactly that—guessed at the pain not only beneath Tom Robinson's skin, but also under that of her neighbor.

How the Novel Came to Be Written

Any claims for To Kill a Mockingbird as a book that changed history could not have seemed more far-fetched one winter night in 1958, as Nelle Harper Lee huddled in her outer-borough New York apartment trying to finesse her unruly, episodic manuscript into some semblance of a cohesive novel. All but drowning in multiple drafts of the same material, Lee suddenly threw open a window and scattered five years of work onto the dirty snow below.

Did Lee really intend to destroy To Kill a Mockingbird? We'll never know. Fortunately, in the next moment, she called her editor. J.B. Lippincott's formidable Tay Hohoff promptly sent her outside to gather all the pages back–thus rescuing To Kill a Mockingbird from the slush.

The novel had its origins in Lee's hometown of Monroeville, Alabama—the small, Southern town that the fictional Maycomb is based upon. Her father's unsuccessful defense of a black man and his son accused of murder, in addition to the Scottsboro Boys trials and another notorious interracial rape case, helped to shape Lee's budding social conscience and sense of a dramatic story.

Along with his legal practice, Lee's father published and edited the town newspaper. His regard for the written word impacted Lee's sensibility as surely as his respect for the law. Lee would name her idealized vision of her father after Titus Pomponius Atticus, a friend of the Roman orator Cicero renowned as, according to Lee, "a wise, learned and humane man." For a long time, Lee called her work in progress Atticus. Once she fastened on To Kill a Mockingbird she did not look back.

An early version of the novel, titled Go Set a Watchman, featured Scout as an adult returning to Maycomb. Lee’s editor, Tay Hohoff, asked her to rewrite the story from a child’s perspective, which she did. Until recently, the manuscript for Go Set a Watchman was believed lost. It was discovered decades later and published by HarperCollins in July 2015.

Lippincott finally published To Kill a Mockingbird on July 11, 1960, by which time an unprecedented four national mail-order book clubs had already selected it for their readers. The first line of the Washington Post's review echoed many similar notices that praised the novel for its moral impact: "A hundred pounds of sermons on tolerance, or an equal measure of invective deploring the lack of it, will weigh far less in the scale of enlightenment than a mere 18 ounces of new fiction bearing the title To Kill a Mockingbird."

Eighty weeks later, the novel still perched on the hardcover bestseller list. During that time, it had won the Pulitzer Prize for fiction and the hearts of American readers. One can't help wondering how literary history might have been different had Harper Lee thrown her manuscript out the window on a slightly windier night. 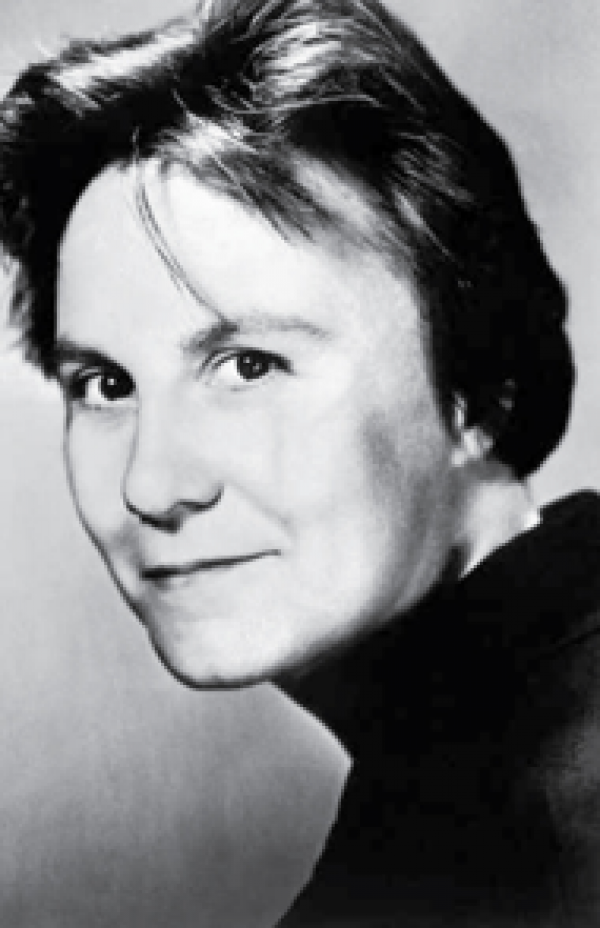 If Nelle Harper Lee ever wanted proof that fame has its drawbacks, she didn't have to look farther than her childhood neighbor, Truman Capote. After her enormously successful first novel, she lived a life as private as Capote's was public.

Nelle—her first name was her grandmother's spelled backward—was born on April 28, 1926, in Monroeville, Alabama. Her mother, Frances Cunningham Finch Lee, was a homemaker. Her father, Amasa Coleman Lee, practiced law. Before A.C. Lee became a title lawyer, he once defended two black men accused of murdering a white storekeeper. Both clients, a father and son, were hanged.

As a child, Harper Lee was an unruly tomboy. She fought on the playground. She talked back to teachers. She was bored with school and resisted any sort of conformity. The character of Scout in To Kill a Mockingbird would have liked her. In high school Lee was fortunate to have a gifted English teacher, Gladys Watson Burkett, who introduced her to challenging literature and the rigors of writing well. Lee loved 19th-century British authors best, and once said that her ambition was to become "the Jane Austen of south Alabama."

Unable to fit in with the sorority she joined at the University of Alabama, she found a second home on the campus newspaper. Eventually she became editor-in-chief of the Rammer Jammer, a quarterly humor magazine on campus. She entered the law school, but she "loathed" it. Despite her father's hopes that she would become a local attorney like her sister Alice, Lee went to New York to pursue her writing.

She spent eight years working odd jobs before she finally showed a manuscript to Tay Hohoff, an editor at J.B. Lippincott. At this point, it still resembled a string of stories more than the novel that Lee had intended. Under Hohoff's guidance, the perspective was changed to Scout as a child, and two and a half years of rewriting followed. When the novel was finally ready for publication, the author opted for the name "Harper Lee" on the cover, because she didn't want to be misidentified as "Nellie."

To Kill a Mockingbird was published in 1960 to highly favorable reviews and quickly climbed the bestseller lists, where it remained for 88 weeks. In 1961, the novel won the Pulitzer Prize.

Lee later researched a book, similar to Capote's In Cold Blood (1966), about a part-time minister in Alexander City, Alabama, accused of killing five people for their insurance money and later himself murdered by a victim's relative. However, she dropped the project in the 1990s. It wasn't until February of 2015 that news of a second novel surfaced, when Lee's publisher announced a newly discovered manuscript for Go Set a Watchman, the novel Lee wrote before To Kill a Mockingbird.

In the meantime, To Kill a Mockingbird has sold more than 30 million copies in forty languages. In 2011, President Obama awarded her the National Medal of Arts. According to biographer Charles J. Shields, Lee was unprepared for the amount of personal attention associated with writing a bestseller. She led a quiet and guardedly private life. As Sheriff Tate says of Boo Radley, "draggin' him with his shy ways into the limelight—to me, that's a sin." So it would be with Harper Lee.

The Friendship of Harper Lee and Truman Capote

Nelle Harper Lee and Truman Capote became friends in the early 1930s as kindergarteners in Monroeville, Alabama. They lived next door to each other: Capote with aunts and uncles, Lee with her parents and three siblings. From the start they loved reading and recognized in each other "an apartness," as Capote later expressed it. When Lee's father gave them an old Underwood typewriter, they began writing original stories. Although Capote moved to New York City in the third grade to join his mother and stepfather, he returned to Monroeville most summers, eventually providing the inspiration for Dill in To Kill a Mockingbird.

In 1948 Capote published his first novel, Other Voices, Other Rooms. Around that time, Lee quit law school and joined Capote in New York to work at becoming a writer, too. Years of menial jobs followed until To Kill a Mockingbird was ready for publication. Capote read the manuscript and made editorial suggestions. She, in her turn, accompanied him to Kansas to help research In Cold Blood.

After To Kill a Mockingbird was published, Capote resented Lee's success. He could have tried harder to dispel baseless rumors that the novel was as much his work as hers. Their friendship continued during the 1960s and '70s, but Capote's drug and alcohol abuse strained the relationship. Later he would stop publishing and sink into self-parody, sponging off high society and making endless rounds of the talk-show circuit. When Capote died in 1984, Lee confided to friends that she hadn't heard from him in years.

Jazz Master David Baker on To Kill A Mockingbird [1:52]

To Kill a Mockingbird Audio Guide