This title is no longer available for programming after the 2019-20 grant year.

Yu Hua is one of China's most well-known authors and his bestselling novel, To Live, has been named one of China's ten most influential books of the last decade. The novel was made into a critically acclaimed film of the same name with China's best-known actress. It tells the poignant tale of a man's transformation from the spoiled son of a rich landlord to an honorable and kindhearted peasant as he and his family endure the ravages of war and starvation. Yu explains in a postscript that the idea for the novel came after he was deeply moved by an American folk song called "Old Black Joe" about a slave who lived through decades of hardships yet was still kind. "Though unmistakably Chinese," writes author Ha Jin, Yu's novels "are universally resonant."

"Just as a mother beckons her children, so the earth beckoned the coming of night." —from To Live

Although it was initially banned in China, the internationally award-winning epic novel To Live, which was first published in 1993, is now considered to be one of the country's most influential books, with millions of copies in print. Called a "Chinese Book of Job" by the author Wang Ping, it tells the poignant story of a man's transformation from a mean, selfish wastrel to a devoted husband and father trying desperately to keep his family alive during the worst famine in Chinese history and a time of dramatic political and social change. Spanning four decades of modern Chinese history and written in stripped-down prose with a sensitivity to the dialogue and details of everyday life, the novel is tragic and filled with pain, but it is also a tale of endurance, humility, beauty, love, and ultimate redemption.

Fugui is the brash son of a wealthy land-owning family who, at the beginning of the novel, is unfaithful and cruel to his wife, Jiazhen. When he gambles away his family's entire fortune, dragging his mother, father, pregnant wife, and young daughter into poverty, he sets into motion a lifetime of suffering that will soon illuminate for him the error of his ways. He is forced into the Nationalist army, whisked away to fight with no opportunity to tell his family where he has gone. Much later, he returns home to find that his mother has died, and that his beloved and spirited daughter, Fengxia, has been stricken with a fever rendering her deaf and unable to speak. Now a poor peasant farmer, Fugui struggles to understand his sensitive son, Youqing, and as time passes and the family endures more and more hardships, Fugui comes to be filled with gratitude and respect for his stoic wife. Yet, as Fugui's capacity for love and his understanding of others grow, calamities continue to strike.

Fugui's story is told in his own voice to a traveling folk song collector, whom he meets later in life while working with his ox in the fields. In a postscript to the book, Yu says that he was inspired to write To Live after hearing "Old Black Joe," an American folk song about a slave who lives a harsh life but still views the world kindly. Old Black Joe and Fugui could not be more different given their cultural experiences, he explains, but they are both human. This is what makes literature magical, he says, adding that he learned about himself from reading novels by William Faulkner, Toni Morrison, and National Hawthorne.

Despite its epic breadth and the harrowing tragedies at its core, To Live is fast-paced, laced with Yu's signature humor and frankness. Prior to being published in book form, To Live was serially published in the Shanghai literary journal Harvest, which is where the famed Chinese film director Zhang Yimou first came across it. After staying up all night to read it, Zhang resolved to make To Live into a film, which premiered in 1994 to international acclaim, winning the Grand Jury prize and the Best Actor award at that year's Cannes Film Festival. The book was also adapted into a television miniseries entitled Fugui in 2005, and brought to the stage in a production by influential Chinese avant-garde theater director Meng Jinghui in 2012. "The theme which is central in much of my writing is ... Chinese people can overcome any difficulty presented to them," Yu told Modern Chinese Literature and Culture. "The Chinese character remains strong."

The book's translator, Michael Berry, was 22 and a senior at Rutgers University when he sent a fax to Yu Hua requesting permission to translate To Live into English. To this day he feels a great sense of gratitude to Yu for entrusting his masterpiece to a young aspiring literary translator.

"Yu Hua writes with a cold eye but a warm hand." — Ha Jin, award-winning poet and author of Waiting

One of the most well-known authors in China today, Yu Hua (Yu is his surname, Hua his given name) grew up in the eastern coastal province of Zhejiang, just south of Shanghai. After high school he received rudimentary training in dentistry and spent five years as a practicing dentist. It wasn't, he discovered, well-suited to him. As he puts it: "The inside of the mouth is one of the ugliest spectacles in the world" (New York Times Magazine).

The government was in charge of assigning professions, but Yu made it a goal to become a state-salaried artist at the local Cultural Bureau, having observed with envy the liberty these artists seemed to have in determining how they spent their days. To show he was qualified, he wrote in his spare time—when he wasn't pulling teeth—and the government granted his request. The new position gave Yu what many writers will say they covet: time to write when the mood strikes, a flexible schedule, and the ability to sleep in. He was so happy that he would wake up smiling, he told Modern Chinese Literature and Culture.

Yu spent much of his youth roaming the halls of a hospital where his parents practiced medicine. He still associates the smell of Lysol with his childhood. Because their home faced the morgue, Yu would frequently hear the sounds of people weeping. It wasn't unusual for Yu and his brother to see their father coming out of the operating room with his smock covered in blood, or to witness a nurse carrying a bucket of bloody extractions to the nearby pond to be discarded.

This was during the time of the Cultural Revolution (1966-1976) when, at the behest of Chairman Mao Zedong, traditional culture was shunned and objects, including books, were destroyed. People were encouraged to denounce those they felt had wandered from the Socialist path. His town's walls were covered in "Big Character" posters with slogans and denunciations issued by one person to another. With almost no access to books, reading these posters became one of Yu's first experiences with literature. "I remember carrying my book-bag on my way home from school and reading each poster as I walked along," he said. "I wasn't interested in the revolutionary slogans. I was interested in the stories" (Modern Chinese Literature and Culture).

Though Yu was fascinated by the posters, he often worried that he'd see his father's name in a headline. His fear was well-founded, as one day his father was called out as a "runaway landlord" and "capitalist roader." The accusations stemmed from Yu's family history: his grandfather's family had once owned many acres of land and held a landlord pedigree. But Yu's grandfather—a slacker, Yu calls him, and a partier—sold off the property bit by bit to pay for his extravagant lifestyle until, by 1949, he had squandered just about everything and lost his landlord status. Other than the public shaming, Yu's father faced no further consequences.

Yu's writing career began just after the Cultural Revolution ended. His controversial early work—described as surreal and avant-garde, and often violent—drew from both his vivid childhood experiences and his desire to help Chinese literature evolve after a period during which literature was, as he has said, virtually nonexistent. Some of his early influences were Franz Kafka, Bruno Schulz, Jorge Luis Borges, and Yasunari Kawabata, whom he read when translations of their work came to China in the 1980s. Yu's later influences include V.S. Naipaul and Toni Morrison.

Yu's "novels are ingeniously structured and exude a mythical aura," writes author Ha Jin. "Though unmistakably Chinese, they are universally resonant." The first Chinese novelist to win the James Joyce Foundation Award, Yu is the author of the novel Chronicle of a Blood Merchant—also referred to (along with To Live) as one of the most influential books in China—as well as the novels The Seventh Day, Cries in the Drizzle, and Brothers, which was a finalist for the Man Asian Literary Prize. His books also include Boy in the Twilight: Stories of the Hidden China and China in Ten Words, a book of essays. His work has been translated into more than 20 languages, and he is the recipient of France's Prix Courrier International and Italy's Premio Grinzane Cavour. His works continue to be adapted for film, theater, and television.

Having lived through two radically different periods in Chinese history, Yu often feels that he has the soul of a hundred-year-old man, something he thinks is good for his writing (Modern Chinese Literature and Culture). He is "very different from any of the characters in his novel," says his translator, Michael Berry, who first met Yu in the late 1990s. Yu has a "sharpness, a satirical wit, an observant gaze, and a childlike curiosity. I still remember his ecstatic reaction to seeing the neon lights on Broadway" and "his excitement when I took him to his first jazz performance." Today, Yu lives in Beijing with his wife, the poet Chen Hong. 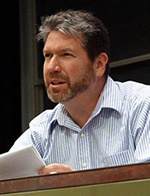 Michael Berry is the translator of several novels, including Remains of Life by Wu He (Columbia, 2017), The Song of Everlasting Sorrow (with Susan Chan Egan) by Wang Anyi (Columbia, 2008), To Live by Yu Hua (Anchor, 2004), Nanjing 1937: A Love Story by Ye Zhaoyan (Anchor, 2004), and Wild Kids: Two Novels about Growing Up by Chang Ta-chun (Columbia, 2000). He is a contributor to the ChinaFile and his popular essays in Chinese have been published in the weekly Friday supplement of The Beijing News. He is currently a professor in the Department of Asian Languages & Cultures at the University of California, Los Angeles.