Three-time Pulitzer Prize-winning author Thornton Wilder began his storied career as a novelist before branching out to short stories, screenplays, and dramatic works. At first glance, his play Our Town appears to be a simple, innocuous portrait of life in the small New Hampshire town of Grover’s Corners. But as time passes in the three acts—an ordinary day, a wedding, a death—the play builds to a soaring exploration of human existence: its boundless trials, joys, questions, certainties. This play “is one of the great democratic products of American literature. It gives you the sense that the same profound and horrible truths hold true whether you’re a sophisticate in Paris or a farmer in Grover’s Corners” (acclaimed writer Tom Perrotta in the Atlantic).

"It is an attempt to find a value above all price for the smallest events of our daily life.” —Thornton Wilder on Our Town

“The morning star always gets wonderful bright the minute before it has to go,—doesn’t it?”—the Stage Manager in Our Town (p. 4)

Thornton Wilder’s stage drama Our Town (1938) takes place between 1901 and 1913 in Grover’s Corners, New Hampshire, a community that has not produced anyone very “remarkable” (p. 6). The townspeople know many pleasures: seeing the sun rise over the mountain, noticing the birds, watching for the change of seasons. Wilder wanted the play to show “the life of a village against the life of the stars,” he said in an early preface to the book, and to explore “the trivial details of human life in reference to a vast perspective of time, of social history and of religious ideas.”

The audience encounters Grover’s Corners through the point of view of the Stage Manager—a character in the play who functions as the narrator and a sympathetic director. While he sometimes talks directly to the actors, he maintains his distance; most of his lines are delivered as an address to the audience. He tells the audience that the play will show “people a thousand years from now” that “this is the way we were: in our growing up and in our marrying and in our living and in our dying.” The three acts mostly follow two characters, Emily Webb and George Gibbs, who go to school together in Act I, marry in Act II, and experience tragedy in Act III. The play’s opening stage directions are clear and radical, especially for 1938: “No curtain. No scenery.” The costumes are simple; the lighting instructions, complex.

On January 22, 1938, the first performance of Our Town took place at the McCarter Theatre in Princeton, New Jersey. The first New York performance occurred soon thereafter—a now-famous production at the Henry Miller Theatre directed by Jed Harris. Widely produced abroad, this Pulitzer Prize-winning play is not only an American classic but a classic of world literature.In Emily's final epiphany—wisdom she has learned through suffering—we seem to hear Thornton Wilder's voice speak to us: "Oh, earth, you're too wonderful for anybody to realize you."

The Stage Manager is the play’s narrator, who both directs the play and addresses the audience. Always descriptive, sometimes didactic, often funny, he begins the play on May 7, 1901, and ends it twelve years later in the summer of 1913.

Mr. Webb is the publisher and editor of the town newspaper, the Grover’s Corners Sentinel.

Mrs. Webb’s dour demeanor contrasts with her beautiful garden of sunflowers and her maternal devotion.

Emily, the brightest girl in Grover’s Corners, dreams of living an extraordinary life. In Act II, she marries George Gibbs after realizing that his opinion means more to her than anyone else’s.

Wally, the Webb’s youngest child, dies after his appendix bursts while on a Boy scout camping trip.

Dr. Gibbs is the town doctor. He will die in 1930; the new hospital will be named after him.

Mrs. Gibbs, Dr. Gibbs’s wife, dies from pneumonia during a visit to Ohio.

Even as a teenager, George Gibbs wants to be a farmer and marry Emily.

When the play begins, Joe Crowell is the town’s 11-year-old newsboy. He later gets a scholarship to the Massachusetts Institute of Technology.

Simon Stimson, the organist at church who secretly drinks too much, “has seen a pack of trouble.” 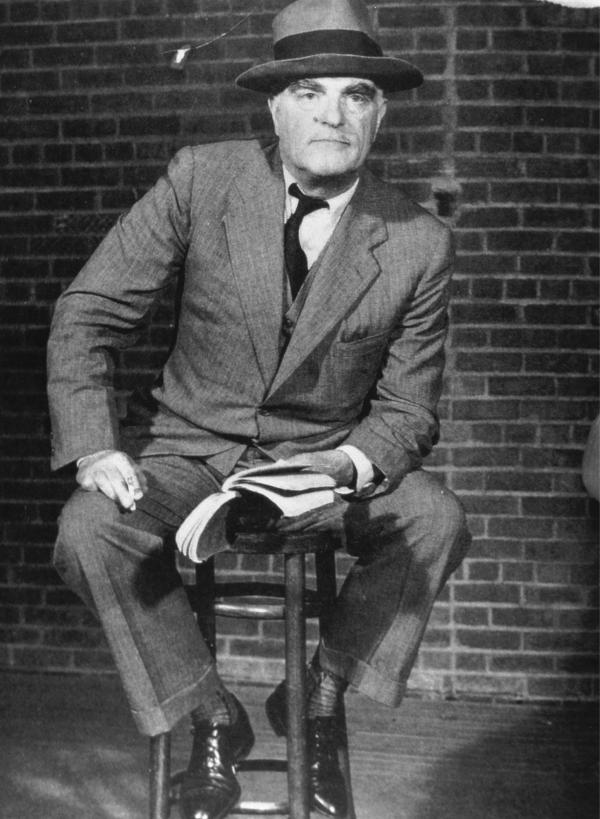 Thornton Niven Wilder is the only writer to have won Pulitzer Prizes for both fiction (The Bridge of San Luis Rey in 1928) and drama (Our Town in 1938 and The Skin of Our Teeth in 1943).

Born in Madison, Wisconsin, in 1897, Wilder was the son of Amos Parker Wilder and Isabella Niven Wilder. Amos Wilder was a man of intellect and ambition. Having earned a PhD from Yale University in political economy, Amos became a well-known public speaker and the owner and editor of the Wisconsin State Journal. In 1906, President Theodore Roosevelt appointed Amos consul general in Hong Kong, and again in 1909 in Shanghai. While Amos directed his children’s education, Isabella encouraged them to pursue their interests in literature and music. This environment of international education and an appreciation for the arts nurtured all the Wilder children. Wilder’s older brother, Amos Niven, was a biblical scholar, poet, and literary critic; his sister Charlotte a professor and poet; Isabel a successful novelist with training in drama from Yale; and Janet a zoologist and environmentalist.

Isabella Wilder and the children lived in China briefly before settling in Berkeley, California. Thornton attended college at Oberlin College and Yale, after which he studied archaeology at the American Academy in Rome. Before returning to the United States, Wilder spent time in Paris, where he received a telegram from his father: “ HAVE JOB FOR YOU TEACHING NEXT YEAR […] LEARN FRENCH. ” Wilder already knew some French, and improved his skills so he could take a teaching position at the Lawrenceville School in New Jersey.

Wilder volunteered to serve in both World Wars. During the first, he served as an enlisted man in the Army’s Coast Artillery Corps section, stationed in Newport, Rhode Island. In World War II, he advanced to the rank of lieutenant colonel after three years of active duty in North Africa and Italy. His military honors include the Legion of Merit and the Bronze Star.

Education was one of Wilder’s deepest passions. During his time at Lawrenceville, he earned a master’s degree in French literature from Princeton University. Even after the success of The Bridge of San Luis Rey made a day job unnecessary, he continued to teach when interesting opportunities arose. During the 1930s, he taught courses in classics and composition at the University of Chicago and served as the Charles Eliot Norton Professor of Poetry at Harvard University in 1951-52.

An Interview with Thornton Wilder

For more than 50 years, the Paris Review has published interviews with great writers from around the world. The following is excerpted from an interview with Thornton Wilder that appeared in the winter 1956 issue.

Paris Review: Do you feel that you were born in a place and at a time, and to a family all of which combined favorably to shape you for what you were to do?

Thornton Wilder: Comparisons of one’s lot with others’ teaches us nothing and enfeebles the will. […] Everyone is born with an array of handicaps—even Mozart, even Sophocles—and acquires new ones. In a famous passage, Shakespeare ruefully complains that he was not endowed with another writer’s “scope”! We are all equally distant from the sun, but we all have a share in it.

TW: I think so, but in stating them I find myself involved in a paradox. A dramatist is one who believes that the pure event, an action involving human beings, is more arresting than any comment that can be made upon it. On the stage it is always now: the personages are standing on that razor edge, between the past and the future, which is the essential character of conscious being; the words are rising to their lips in immediate spontaneity. A novel is what took place; no self-effacement on the part of the narrator can hide the fact that we hear his voice recounting, recalling events that are past and over, and which he has selected—from uncountable others—to lay before us from his presiding intelligence. […] The theater is supremely fitted to say: “Behold! These things are.” Yet most dramatists employ it to say: “This moral truth can be learned from beholding this action.”

PR: Is your implication, then, that drama should be art for art’s sake?

TW: Experience for experience’s sake—rather than for moral improvement’s sake. When we say that Vermeer’s Girl Making Lace is a work of art for art’s sake, we are not saying anything contemptuous about it. I regard the theater as the greatest of all art forms, the most immediate way in which a human being can share with another the sense of what it is to be a human being. This supremacy of the theater derives from the fact that it is always now on the stage.

TW: Yes, I think so. I have become aware of it myself only recently. Those ideas seem to have prompted my work before I realized it. Now, at my age, I am amused by the circumstance that what is now conscious with me was for a long time latent. One of those ideas is this: an unresting preoccupation with the surprise of the gulf between each tiny occasion of the daily life and the vast stretches of time and place in which every individual plays his role. By that I mean the absurdity of any single person’s claim to the importance of his saying, “I love!” “I suffer!” when one thinks of the background of the billions who have lived and died, who are living and dying, and presumably will live and die. [. . . ]

This preoccupation came out in my work before I realized it. Even Our Town, which I now see is filled with it, was not so consciously directed by me at the time. At first glance, the play appears to be practically a genre study of a village in New Hampshire. On second glance, it appears to be a meditation about the difficulty of, as the play says, “realizing life while you live it.”

TW: I think I write in order to discover on my shelf a new book that I would enjoy reading, or to see a new play that would engross me.

PR: Is there some final statement you would wish to make about the novel?

TW: […] Gertrude Stein once said laughingly that writing is merely “telling what you know.” Well, that telling is as difficult an exercise in technique as it is in honesty, but it should emerge as immediately, as spontaneously, as undeliberately as possible.