Their Eyes Were Watching God

To call Zora Neale Hurston's Their Eyes Were Watching God an "African American feminist classic" may be an accurate statement—it is certainly a frequent statement—but it is a misleadingly narrow and rather dull way to introduce a vibrant and achingly human novel. The syncopated beauty of Hurston's prose, her remarkable gift for comedy, the sheer visceral terror of the book's climax, all transcend any label that critics have tried to put on this remarkable work. First published amid controversy in 1937, then rescued from obscurity four decades later, the novel narrates Janie Crawford's ripening from a vibrant, but voiceless, teenage girl into a woman with her finger on the trigger of her own destiny. Although Hurston wrote the novel in only seven weeks, Their Eyes Were Watching God breathes and bleeds a whole life's worth of urgent experience.

"The wind came back with triple fury, and put out the light for the last time…. They seemed to be staring at the dark, but their eyes were watching God." —from Their Eyes Were Watching God

Their Eyes Were Watching God (1937) begins with our eyes fixed on a woman who returns from burying the dead. Written in only seven weeks while on a Guggenheim Fellowship in Haiti, Zora Neale Hurston's novel chronicles the journey of Janie Mae Crawford from her grandmother's plantation shack to Logan Killicks' farm, to all-black Eatonville to the Everglades—until a tragedy brings her back to Eatonville. From this vantage point, Janie narrates her life story to her best friend, Pheoby Watson, satisfying the "oldest human longing—self-revelation."

Forced to marry for money at 16, Janie at first believes that love automatically comes with marriage. Unable to endure her mule-like servitude and the desecration of her dreams, she spontaneously leaves Logan for Joe Starks, a handsome, ambitious man determined to put her on a pedestal once he becomes mayor of Eatonville. After enduring a mostly joyless 20-year marriage to him, Janie finally meets a young, uneducated wastrel named Tea Cake. With him she thinks she can find genuine love for the first time, but fate intervenes, and Janie fears she may have to choose between his safety and her own.

Although the novel is not an autobiography, Hurston once reflected that it is, at heart, a love story, inspired by "the real love affair of [her] life." She also fictionalized another important incident in her life in the novel: In 1929, Hurston survived a five-day hurricane in the Bahamas, getting herself and another family out of a house moments before it began to collapse.

Hurston's conviction that black culture is valuable, unique, and worthy of preservation comes through in Their Eyes Were Watching God via its harmonious blend of folklore and black idiom. In Janie Mae Crawford, Hurston rejects 19th- and early 20th-century stereotypes for women and creates a protagonist who though silenced for most of her life ultimately finds her own voice. 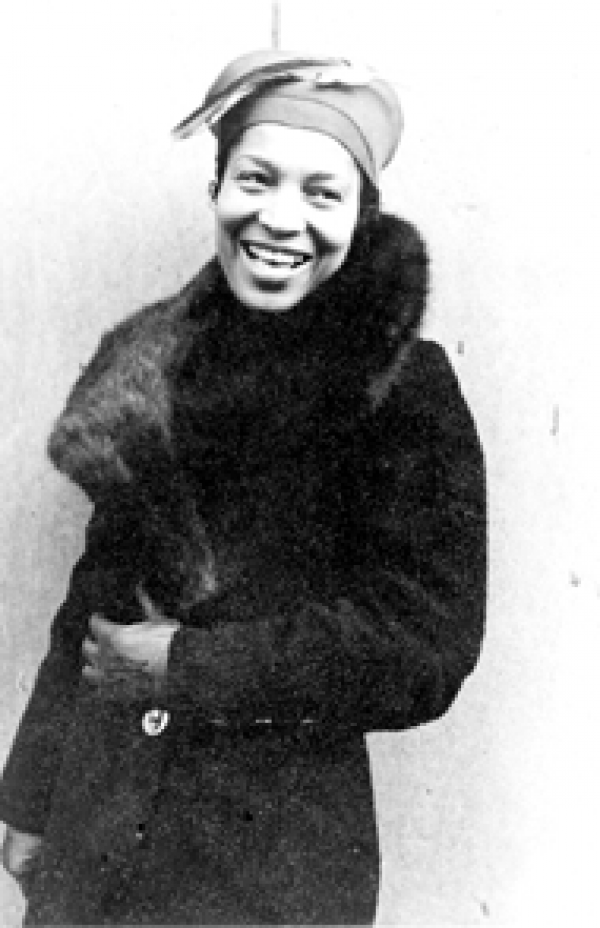 Now lauded as the intellectual and spiritual foremother to a generation of black and women writers, Zora Neale Hurston's books were all out of print when she died in poverty and obscurity in 1960.

Born on January 7, 1891, in Notasulga, Alabama, Hurston and her family soon moved to Eatonville, Florida, the first all-black incorporated town in the United States. Her parents were John Hurston, a carpenter and Baptist preacher who served several terms as mayor of Eatonville, and Lucy Potts Hurston, a schoolteacher before she raised eight children. Her mother's death and father's remarriage led the outspoken Hurston to leave her hometown at 14 and become a wardrobe girl in an all-white traveling Gilbert and Sullivan troupe.

She completed her education at Morgan Academy in Baltimore and Howard University in Washington, DC, supporting herself with a variety of jobs from manicurist to maid. Heeding her mother's encouragement to "jump at de sun," she arrived in New York in January 1925 with $1.50 in her pocket.

Later that year, as the only black scholar at Barnard College, Hurston studied with Dr. Franz Boas, often called the father of American anthropology. His encouragement, combined with a stipend of $200 a month and a car from patron Charlotte Osgood Mason, allowed Hurston to complete much of her anthropological work in the American South. This lifelong passion to collect, record, and broadcast the everyday idiomatic communication of her people would inform four novels, two collections of folklore, an autobiography, and dozens of stories, articles, plays, and essays.

This ambition also led to tension in her romantic life. Hurston married and divorced three husbands and, at age 44, fell in love with 23-year-old Percy Punter. When he asked her to forsake her career to marry him, she refused because she "had things clawing inside [her] that must be said." She wrote Their Eyes Were Watching God, trying in its pages "to embalm all the tenderness of [her] passion for him."

Despite the novel's 1937 publication, Hurston's struggle for financial security continued throughout the 1940s. Once, she even pawned her typewriter. The largest royalty any of her books ever earned was $943.75. Since most of her books were published during the Depression, she paid her bills through story and essay sales, book advances, and two Works Progress Administration jobs with the Federal Writers' Project.

In the 1950s Hurston remained devoted to writing, but white publishers rejected her books, in part because the "New Negro" had fallen out of fashion. Other complications followed, and her health seriously declined. Her anticommunist essays and denunciation of school integration increasingly alienated her from other black writers. After a stroke in 1959, she reluctantly entered a welfare home, where she died penniless on January 28, 1960. Her grave remained unmarked until 1973.

Their Eyes Were Watching God was published in New York on September 18, 1937. Less than two weeks later, Richard Wright (later the author of Native Son and Black Boy) notoriously condemned the novel for carrying "no theme, no message, no thought. In the main, her novel is not addressed to the Negro, but to a white audience whose chauvinistic tastes she knows how to satisfy." He believed that the novel's lack of anger was one of its greatest faults, as well as its "minstrel technique that makes 'the white folks' laugh."

While Wright claimed that Hurston pandered to whites, Alain Locke said she oversimplified Southern black experience under the segregationist system known as Jim Crow. In January 1938, Locke's infamous review publicly asked Hurston when she would begin to write "social document fiction." This response so wounded her that she later regretted writing the novel at all.

But critics who felt that Hurston's fiction undermined their attempts to combat racism misunderstood her aesthetic. As she once wrote in a letter, "I tried . . . not to pander to the folks who expect a clown and a villain in every Negro. Neither did I want to pander to those 'race' people among us who see nothing but perfection in all of us." Holding to this vision would cost her, financially and otherwise, right up until her death in 1960.

A decade later, writer Alice Walker was researching a story on voodoo. She came across Hurston's Mules and Men (1935), which ultimately led Walker to Their Eyes Were Watching God, the book she regards as the most important of her life.

Posing as Hurston's niece, Walker traveled to Eatonville, where she endured many sets of contradictory directions and found her way at last to the cemetery: the Garden of Heavenly Rest, on 17th Street. Even there, no one was certain of the grave's location. The weeds were so thick that Walker feared snakes might be lurking underfoot. She finally found the spot, and she purchased and commissioned a proper stone to mark Hurston's grave.

In the mid to late 1970s, three important publications launched the Hurston revival that continues to this day.

In the March 1975 issue of Ms. magazine, Walker published her article about finding Hurston's grave, titled "In Search of Zora Neale Hurston." Literary scholar Robert Hemenway had already been working on the first Hurston biography, which came out in 1977. And in 1979, Walker highlighted 14 prose works in the first-ever Hurston anthology.

Hurston's posthumous literary revival also had much to do with revisions to the literary canon then taking place in university English departments across the United States. The emergence of feminism and multiculturalism has helped bring her to the center of the literary stage. But the strongest voice in Hurston's favor has been her own. How fitting that the protagonist readers most often associate with Zora Neale Hurston is Janie Crawford—a woman who not only survives against long odds, but triumphs.

"I do not attempt to solve any problems [in my novels]. I know I cannot straighten out with a few pen-strokes what God and men took centuries to mess up. So I tried to deal with life as we actually live it—not as the sociologists imagine it."
—Zora Neale Hurston, from a letter to Fannie Hurst