It is with great sadness that the National Endowment for the Arts acknowledges the passing of pianist and composer McCoy Tyner, recipient of a 2002 NEA Jazz Masters Fellowship, the nation’s highest honor in jazz. We join the jazz community in mourning his death while celebrating his life and many contributions to jazz.

McCoy Tyner's powerful, propulsive style of piano playing was an integral part of the John Coltrane Quartet in the early 1960s and influenced countless musicians that followed him. His rich chord clusters continue to be imitated by many young jazz pianists. On receiving the Jazz Masters Fellowship in 2002, Tyner said: “Art is a wonderful way to express who we really are, and what we desire to be.”

Tyner grew up in Philadelphia, where his neighbors were jazz musicians Richie and Bud Powell, who influenced his piano playing. He studied music at the West Philadelphia Music School and later at the Granoff School of Music. He began playing gigs in his teens, and first met Coltrane while performing at a local club at age 17. His first important professional gig was with the Benny Golson–Art Farmer band Jazztet in 1959, with which he made his recording debut.

Soon he began working with Coltrane, a relationship that produced some of the most influential music in jazz. From 1960 to 65, Tyner played a major role in the success of the Coltrane quartet (which included Elvin Jones on drums and Jimmy Garrison on bass), using richly textured harmonies as rhythmic devices against Coltrane's "sheets of sound" saxophone playing.

After leaving the quartet, Tyner demonstrated his tremendous melodic and rhythmic flair for composition on such albums as The Real McCoy. He continued to experiment with his sound, pushing rhythms and tonalities to the limit, his fluttering right hand creating a cascade of notes. In particular, he explored the trio form, recording with a series of different bassists and drummers, such as Ron Carter, Stanley Clarke, Art Davis, Al Foster, Elvin Jones, and Tony Williams. In the 1980s, he recorded with a singer for the first time, Phyllis Hyman.

In the 1990s, he led a big band in new arrangements of previously recorded songs, used Latin American rhythms and forms, and revealed the romantic side of his playing with a surprising album of Burt Bacharach songs. While experimenting with his sound, Tyner eschewed the use of electric pianos, preferring the warm sound of an acoustic piano, and earned five Grammy Awards for his recordings.

For more information on Tyner, the Smithsonian Jazz Oral History Program, supported by the National Endowment for the Arts, has an oral history with Tyner. 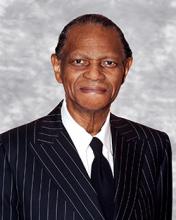 2002 NEA Jazz Master McCoy Tyner's powerful, propulsive style of piano playing was an integral part of the John Coltrane Quartet in the early 1960s and influenced countless musicians that followed him.