Launched in 2013, the ACPSA is intended as an annual product. Complete state estimates, corresponding with the national account, became available in 2018.

Partnership between the National Endowment for the Arts’ Office of Research & Analysis and the U.S. Bureau of Economic Analysis.

State-level estimates of arts and cultural value-added, employment, and compensation by industry;

Location quotients (i.e., a state’s concentration of arts and cultural value-added, employment, or compensation indexed to the overall U.S. share of 1.0);

This wave of the ACPSA reflects comprehensive revisions or “benchmark” updates to the Bureau of Economic Analysis’ national income and product accounts. Consequently, revisions were made to the full time-series of the ACPSA dataset, beginning, at the state level, in 2001 and ending in 2017.

The comprehensive revisions show that the arts economy was larger than previously thought. Following the benchmark update, arts and cultural “value added” in 2016 was $839.6 billion—an amount $35.4 billion greater than the pre-revision 2016 estimate of $804.2 billion.

For many states, revised additions stemmed largely from web broadcasting and streaming, which accounted for much of the upward revision to the national tally of arts and cultural production. 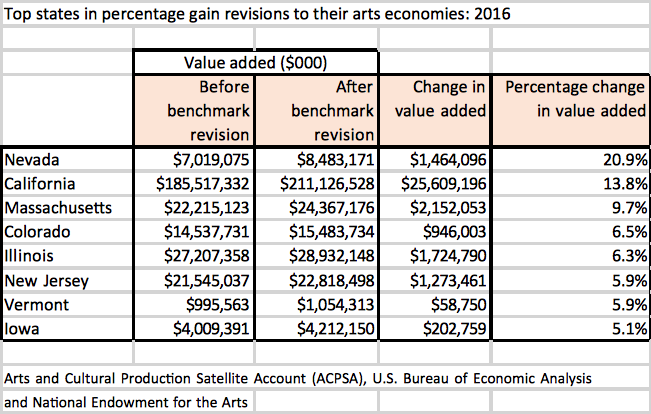 Between 2015 and 2017, the value added by arts and culture to the nation’s economy (not adjusting for inflation) grew at an average annual rate of 5.6 percent. But in five states, the average annual growth rate was 7.2 percent or greater; in the District of Columbia, growth was 6.1 percent.

Economic value from the construction of new arts and cultural structures spiked in Massachusetts between 2015 and 2017. 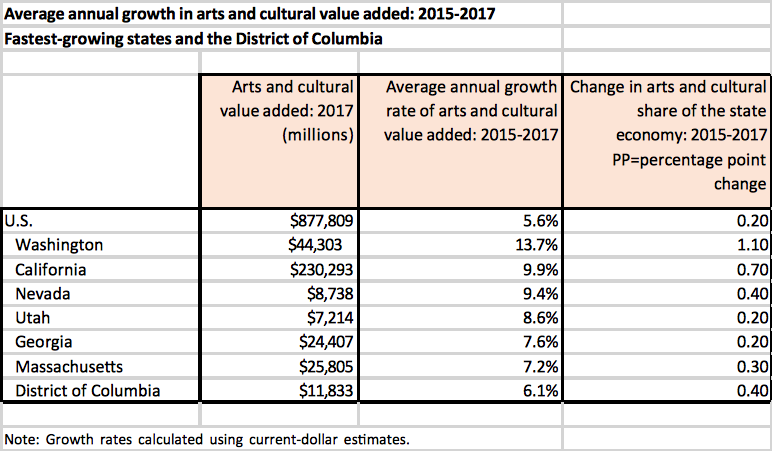