Edgar Allan Poe invented the detective story, perfected the horror tale, and first articulated the theory of the modern short story as well as the idea of pure poetry. A hero of Dostoevsky, Baudelaire, and Nabokov, Poe has never been entirely respectable to American critics because of his twin “faults”: being too eccentric, and too popular among common readers.

It’s time to say the obvious. No author stays internationally popular for 150 years by accident. Poe is one of the classic authors of American literature—a master of the short story, a magician of the short poem, and a critic of brilliance and originality. And no small part of his artistic sleight of hand is that he appeals to readers from childhood to old age. Let us underestimate him nevermore!

"I would give the world to embody one half the ideas afloat in my imagination." —from an 1829 letter

Edgar Allan Poe invented the detective story, perfected the horror tale, and first articulated the theory of the modern short story as well as the idea of pure poetry. A hero of Dostoevsky, Baudelaire, and Nabokov, Poe has never been entirely respectable to American critics because of his twin “faults”: being too eccentric, and too popular among common readers.

It’s time to say the obvious. No author stays internationally popular for 150 years by accident. Poe is one of the classic authors of American literature—a master of the short story, a magician of the short poem, and a critic of brilliance and originality. And no small part of his artistic sleight of hand is that he appeals to readers from childhood to old age. Let us underestimate him nevermore!

Few writers have pioneered so many forms of escapism as Edgar Allan Poe, and fewer still have sought escape so desperately themselves. Poe’s claustrophobic life consisted of one escape attempt after another, most of them unsuccessful. Again and again he dodged poverty through overwork, but never for long. He fled loneliness into an ill-fated, loving but likely chaste marriage to a frail cousin. And drink promised an oblivion that kept luring him back, with increasingly destructive consequences.

Poe’s most satisfying escape was into his writing, where generations of readers have followed him ever since. His sheer versatility continues to astonish. Without Poe, the literary arts of horror, adventure, detective, and science fiction—and, arguably, the short story itself—would have developed very differently. In addition to fiction in several genres, he wrote as famous a poem as American literature can claim. He practiced literary criticism as fine art, blood sport, and, with a series of female poets, the highest form of flirtation. If the movies had existed in the nineteenth century, he might have written screenplays as well—and bedeviled his producers as reliably as he did most of his editors.

At the same time, another side of Poe remained relentlessly logical. In his criticism as well as his detective stories, he could make a case and prove it with mathematical inevitability. Often lost in any study of Poe, too, is his sense of humor. Though their victims would hardly have agreed, his hoaxes, essays, and especially his negative reviews retain their wit even today. Even the most macabre of his stories impart a certain ghoulish tickle.

Poe’s influence is almost too universal to notice. He resembles scarcely anybody before him but, at least a little, almost everyone after. If he hadn’t come along to make American literature safe for ghosts and murderers, for crime-solving know-it-alls and their quarry—for the subconscious mind, in all its murk and madness—somebody else might have. But, to use one of Poe’s signature italicized endings, what if nobody had?

Throughout Poe’s fiction, there runs an undercurrent of inwardness, an obsession with dark corners of the subconscious mind, at the time familiar perhaps only from Mary Shelley’s Frankenstein (1818). He also used a fiction writer’s entire bag of tricks—exclamation points, double-dashes, italics, repetition, the capitalization of first letters and sometimes of entire words—to pump up the urgency of his gothic stories. If melodramatic organ chords could talk, they would sound like the narrator of a Poe story.

Few students of Poe can resist the temptation to group his stories into subsets, like teams. Some might say there’s the claustrophobia team, captained by the “The Cask of Amontillado,” in which the narrator bricks up his friend in a wine cellar. Then there’s the idealized-women team, anchored by “Ligeia” and “The Fall of the House of Usher,” with its female characters either doomed, impossibly perfect, or both. Then there’s the junior detective team, consisting mainly of “The Murders in the Rue Morgue” and its two sequels, in which Poe essentially invented detective fiction.

What these categories all have in common is the self-dramatizing loneliness of genius. Poe almost always relies on a first-person narrator. All his stories are ultimately claustrophobia stories, whether they include a literally confined space, a roomier but still airless and solitary house, or the psychological prison of a damaged character’s mind. Poe’s treatment of women characters also reflects his essential solitude. Many of his narrators marry, but none ever achieves a lasting connection with his bride. Even his most self-satisfied character, the peerless amateur detective C. Auguste Dupin, has but one friend and no equal. We don’t see the suffering this causes, but only the shallowest character would fail to feel it.

No serious writer today could get away with all this hyperventilating. Yet few writers can fully escape Poe’s gravitational pull as one of the original two masters of the American short story. The other would be Nathaniel Hawthorne, who, interestingly, also wrote more than a few horror stories. Like many fledgling writers, American fiction itself started out with a fascination for ghosts and gore.

Edgar Allan Poe began his literary career as a poet, was a merciless critic, and found his greatest success with “The Raven.” Poe defined poetry as “the rhythmical creation of beauty.” He had strong and serious ideas as to what qualified as “poetry,” and what fell short.

Poe wrote several variable essays on poetics—the best is “The Poetic Principle”—through which his ideas evolved, but remained fairly consistent. In “The Philosophy of Composition,” Poe outlines how he came to write “The Raven,” detailing his artistic choices. Scholars have pointed out that Poe’s account of writing the poem is vastly idealized and probably untrue, but however disingenuous Poe is about his composition, he’s crystal clear on his philosophy: “Beauty is the sole legitimate province of the poem.... Melancholy is thus the most legitimate of all poetical tones....The death, then, of a beautiful woman is, unquestionably, the most poetical topic in the world—and equally is it beyond doubt that the lips best suited for such topic are those of a bereaved lover.”

The death of a beautiful woman is the theme that dominates the best of Poe’s poems. There is “the lost Lenore” of “The Raven,” but also Lenore of the poem “Lenore”—Poe thought that the sound or was the most beautiful in the English language. His other famous poem to lost love, “Annabel Lee” tragically ends when he lies down by the side of his “life” and his “bride” “in the sepulcher there by the sea, / In her tomb by the sounding sea.”

Poe devoted his longest essay on poetics, “The Rationale of Verse,” to an overly complicated view of rhythm and meter, but the importance of sound in Poe’s poems cannot be overstated. A master of rhythm, Poe's syllable-by-syllable approach to sound yielded some of the most memorable lines in American poetry. His ear for mimicry is unparalleled. "The Bells" is an onomatopoetic marathon of tinkling tintinnabulation and clanging, banging bells, bells, bells throughout.

Excluding "The Raven," Poe's poems are mostly short lyric pieces—meditations on death or beautiful women or the death of beautiful women—almost always less than a page long. He believed that a poem should be readable in one sitting and objected to what he saw as the epic "mania" among such contemporaries as Longfellow, whom he felt valued Truth and moral didacticism over the exaltation of Beauty.

For all the time he spent writing about it, Poe left behind a rather slim corpus of poetry. Perhaps because his standards were so high, a remarkable share of Poe's poems are excellent in their technique and unity. His poems remain popular in and outside the classroom, and are assured a place in the minds of readers forevermore. 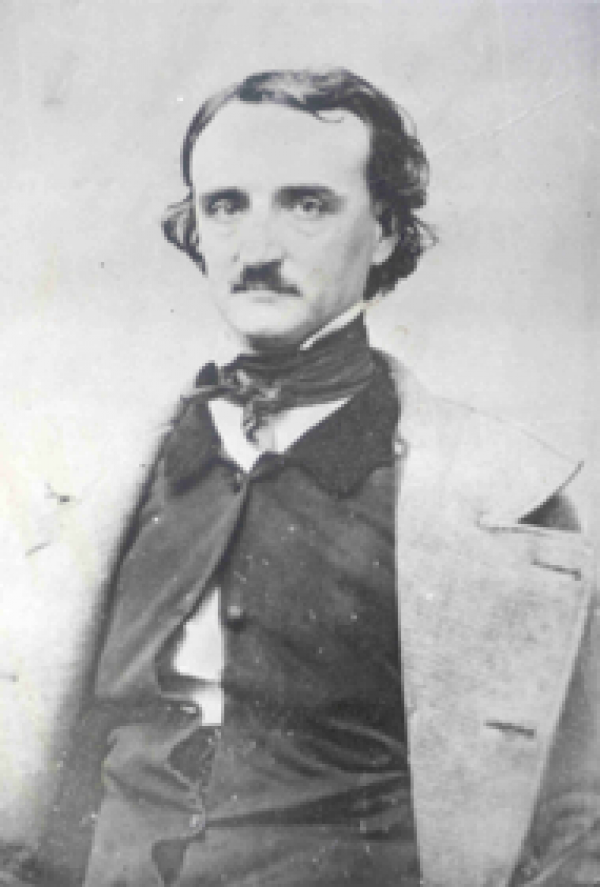 Edgar Poe was born in 1809 in Boston to David and Elizabeth Poe. David was the son of a Revolutionary War hero and a drinker; Elizabeth, a popular stage actress. Soon after Edgar’s birth, David Poe left the family, and in December of 1811, Poe’s mother died. Two-year-old Edgar was taken in by John Allan, a wealthy Richmond tobacco merchant, who lent Poe his middle name.

Poe spent a single year at the University of Virginia. After John Allan refused to pay his second-year tuition, and gambling debts kept him from paying his own way, Poe joined the army. He did well there and, when his enlistment was up, attended West Point for officer training. He was soon expelled for failing to attend class and skipping mandatory chapel services. He settled in Baltimore with his paternal aunt Maria Clemm and her eight-year-old daughter, Virginia, Poe’s future wife.

Poe became a regular contributor to the Southern Literary Messenger, publishing not just stories but scathing book reviews that earned him the nickname “tomahawk man.” Poe, Virginia, and Maria Clemm moved to Richmond, where Poe then took the reins as editor of the Messenger. The next year, Poe, 27, and Virginia, 13, married.

Poe resigned from the Messenger in 1837 over a salary disagreement and moved the family to New York where financial troubles continued to haunt him. He met with some success in 1840, when he released Tales of the Grotesque and Arabesque, including all his stories up to that point.

In 1842 Virginia ruptured a blood vessel, the first sign of the ill health that plagued her short life. To cope with her illness and the stress of his failing finances, Poe occasionally turned to alcohol. He repented after each binge, but his employers and friends took note. In 1845, Poe published “The Raven,” which brought him temporary popular and critical acclaim. Always prone to self-destructive behavior, Poe attacked Henry Wadsworth Longfellow on grounds of plagiarism, greatly damaging his own reputation.

Two years later, Virginia died of tuberculosis. Poe’s own death followed just two years after that. The cause of his death remains uncertain.

The Death of Edgar Allan Poe

On October 3, 1849, Poe was found at Ryan's 4th Ward Polls, a tavern also known as Gunner's Hall, in Baltimore, disoriented and wearing tattered clothing. He was admitted to Washington College Hospital, where he never regained full consciousness and died four days later.

His death was attributed to "congestion of the brain," though no autopsy was performed. Due to conflicting testimonies from his doctor and a libelous obituary written by his literary nemesis Rufus Griswold, the nature of Poe's death has remained in question. Doctors and scholars have theorized that Poe died of epilepsy, hypoglycemia, beating, rabies, alcohol, heart failure, murder, or carbon monoxide poisoning. One of the most compelling scenarios is that Poe, found on election day, was a victim of "cooping," a form of voter fraud in which a person is dressed up, beaten, drugged, and forced to vote multiple times—the term is related to a "chicken coop," as victims were often held captive in a small space while abused. Not one of these theories has been proven, and Poe's death remains a mystery.