It is with great sadness that the National Endowment for the Arts acknowledges the death of bluegrass musician Mac Wiseman, from Nashville, Tennessee, recipient of a 2008 NEA National Heritage Fellowship—the nation’s highest honor in the folk and traditional arts.

Mac Wiseman was an original member of Lester Flatt’s and Earl Scruggs’ Foggy Mountain Boys and a member of Bill Monroe’s Blue Grass Boys. In 1951, he began his solo career and recorded classics like “"Tis Sweet to Be Remembered," "Love Letters in the Sand," "Jimmie Brown, the Newsboy," and "Shackles and Chains." He was a co-founder of the Country Music Association in 1958 and an opening act for Johnny Cash during the 1960s.

In a 2008 interview with the National Endowment for the Arts, Mac Wiseman explained what kept him playing and performing music through the years:

“The enjoyment I get out of thinking I'm bringing others some happiness. And that's my real reward for recording—if those recordings can be around generations from now, what a pleasure that would be. And the people who are involved in this music. We have wonderful picking parties, just gathering up at different people's lawns and cooking some hot dogs and hamburgers and maybe having a beer and picking for hours. I still learn a lot. I am able to give back to some extent, but I still pick up things that I think are important. I've always got my eyes and ears open. I listen to everything—I don't always use it all, but I sift it and listen to it.”

For more information on Mac Wiseman, including the full interview and samples of his music, visit arts.gov. 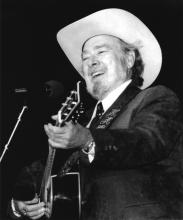 2008 National Heritage Fellow Mac Wiseman became an original member of Lester Flatt's and Earl Scruggs' Foggy Mountain Boys, recording his first Mercury session with them in 1948, and in 1949 he joined Bill Monroe's Blue Grass Boys at the Grand Ole O...