It is difficult to hear the phrase “good trouble” and not instantly think of the late Civil Rights leader and Georgia Congressman John Lewis, for whom the phrase was a type of battle cry. In numerous interviews, Lewis recounted how he came to adopt the phrase as a way to talk about his Civil Rights work. He recalled how his mother often instructed him to stay out of the way, stay out of trouble, which was not an unusual stance for a mother trying to raise a young Black boy in the American South during the mid-20th century. Meeting the Reverend Dr. Martin Luther King, Jr. as a teenager, however, taught Lewis that sometimes the only way to bring change was by getting in trouble. As the Congressman told the Bates College graduating class of 2016, that introduction to King “inspired me to stand up, to speak up, and speak out. And I got in the way, I got in trouble — good trouble, necessary trouble.”

In that spirit and in honor of Black History Month, we reached out to several artists and cultural workers who have previously participated in National Endowment for the Arts interviews to ask their particular take on the idea of good trouble.

We specifically asked them to respond to the following: At this time in American culture, how do you think about "good trouble" when it comes to your art practice? What kind of "good trouble" would you like to see happen in the arts?

The art of difficult conversations is such a critical piece of making “good trouble,” and the importance of feeling empowered to engage in challenging discussions is something I think about all the time. What can we be doing so that we’re not only naming harsh truths but also being actively heard? This is where I believe the power of words and storytelling come in. We work every day at the Asian American Writers’ Workshop to encourage and facilitate “good trouble”—from troubling the waters of community conversations through Black and Asian Feminist Solidarities to literally finding the words we need through Letters for Black Lives, both of these projects exemplify ways that we can use the art of our stories and histories to commit to the necessary practices of allyship and solidarity.

As I ponder the phrase "good trouble" many images with which we are familiar come to mind, such as marches, boycotts, sit-ins, speaking truth to power—identifying the unacceptable as just that: unacceptable.

As it relates to the arts and how I approach my own work, it becomes more complex.

I regularly engage in the good trouble of being an artist, which means carefully listening to my own voice and creating the music I hear. There are lots of loud voices out there telling us how we are "supposed" to be approaching our work and the subject matter we express. It is good trouble to not be overly influenced by these voices.

As an African-American composer of art music, I take my position and responsibility seriously. When I teach, I encourage all of my students to speak with their own voice, and to not succumb to the limitations others may try to impose on them. As an artist, I do the same. There are voices out there that would have all African-American artists address a narrow range of issues, and in a certain style. It is good trouble for an artist to address the issues that are urgent to them personally, in their own voice, irrespective of style.

I believe that the artist must be a citizen aware of the context in which they live, both politically and culturally. Then they must define their own world with frames of reference unique to themselves, and invite people into that world at appropriate times. As an artist, I am trying to create an alternative reality in my work, my own heaven, because too much of the world we live in is not welcoming. The good trouble in which I regularly engage is simply to create the music I hear that I feel is important, transformative, and healing for me, and, hopefully, for my audiences as well.

As the phrase relates to the arts in general, I strongly believe that true diversity and inclusiveness is key, encouraging work that is both challenging and healing.

I firmly believe that we, as citizens of our United States, must unite in a way that perhaps has never been done before. Throughout history, individuals and groups stood up for equality and justice for their own race, gender, and disability. But today, we must stand united for the equality and justice of all humankind. "United we stand, divided we fall." At a time when allyship means we understand, support, and unite with others who may be different than us, but in many ways the same.

If that stand takes on an act of civil disobedience, such as holding rallies, marches, etc., so be it, but it must be civil and free from harm to anyone or anything! I am from an era of disabled advocates who would not have gotten the attention of the leaders and decision-makers if we had not participated in "the good trouble" of capturing buses, crawling up the Capitol stairs, and flooding the Senate chambers with people representing all kinds of disabilities, along with their guide dogs, sign language interpreters, and non-disabled compatriots.

We made them stop and take notice, to listen and to hear, and to take action to find viable solutions. Today, we should not go away, we cannot go away...not until justice for all is realized!

Fellow theater-makers (especially white theater-makers, whose immediate needs are met): Whenever you find yourself doom-scrolling, bedeviled by questions of global collapse and/or career envy, remember that you are a tiny dot on this giant planet, and that the work of collective liberation is ongoing, far-reaching, and will happen with or without you. Social media is bad for your mental health but great for connecting with local organizers and abolitionists. Follow them on Facebook and Twitter. When they put out a call for something—money, time, your physical presence—answer the call. Here’s what I know about theater people: We’re good at taking direction. Right now, there’s an Ida B. Wells and a Fred Hampton in every city in the United States. Support their vision. Follow their lead.

Many Americans demonize those who hold opposing views and refuse to talk to them. Our political affiliation has become central to our identity. We have stopped accepting the possibility that any other perspectives could have anything to offer us and regard listening to others as a betrayal of our tribe. Speaking with our political opponents has become a radical act, an act of good trouble. I sculpt social spaces for these kinds of humanizing and transformative conversations. Through this art practice, the viewer can explore the full range of human complexity.

In this current period of regional and national challenge, we witness the potential power and complicated processes by which our democracy unfolds. As the late civil rights leader and Congressman John Lewis speaks of "good trouble", I acknowledge the importance of personal action.

In my work as an artist, art is a mirror of representation that simultaneously enables me reach beyond the limits of my wheelchair. Defining disability as a socially constructed barrier, one that is situational and requires creativity to move beyond. Without abandoning that which makes us unique, we have the ability to move towards a greater understanding of what unites us. Finding beauty in the unexpected by daring to believe in the potential of ourselves through art. 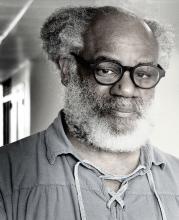 Conversations that Matter: A Grant Spotlight on the Asian American Writers’ Workshop 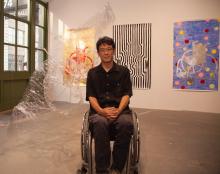 Visual Artist and Disability Rights Advocate Gordon Sasaki on the art of visibility.