2016 NEA Jazz Masters Will Be Honored at Free Concert in Collaboration with the John F. Kennedy Center for the Performing Arts in Washington, DC, on April 4, 2016
Oct 22, 2015

Washington, DC—The National Endowment for the Arts will honor four jazz leaders – three musicians and an advocate – with the 2016 NEA Jazz Masters award for their significant accomplishments in the field. This year’s honorees range from fiery saxophonists who cut their teeth with the legendary John Coltrane, to a vibraphonist who reshaped the direction of jazz by introducing rock elements, to one who has dedicated her life to assisting jazz musicians in need.

The NEA Jazz Masters award is the highest honor that our nation bestows on a jazz musician and includes a cash award of $25,000 and an award ceremony and celebratory concert, among other activities. As part of the National Endowment for the Arts’ 50th anniversary events, the annual NEA Jazz Masters celebration will take place in April 2016 in the nation’s capital, in collaboration with the John F. Kennedy Center for the Performing Arts.

Burton's four-mallet technique on the vibraphone gave the instrument a new musical vocabulary in jazz and a fuller, more piano-like sound than the traditional two-mallet approach. He was one of the progenitors of jazz fusion in the late 1960s, and had a decades-long educational career at Berklee College of Music.

Oxenhorn is the executive director and vice chairman of the Jazz Foundation of America, an organization headquartered in New York, New York, committed to “providing jazz and blues musicians with financial, medical, housing, and legal assistance as well as performance opportunities, with a special focus on the elderly and veterans who have paid their dues and find themselves in crisis due to illness, age, and/or circumstance.”

Sanders is a Grammy Award-winning jazz saxophonist who has shown a remarkable facility performing in a variety of styles, from free to mainstream, displaying what has been called “hard-edged lyricism.” Emerging from John Coltrane's groups of the mid-1960s, Sanders is known for his distinctive sound marked by overblowing, harmonic, and multiphonic techniques.

Shepp is best known for his Afrocentric music of the late 1960s, a unique style of free-form avant-garde jazz blended with African rhythms, and his collaborations with John Coltrane, Horace Parlan, Cecil Taylor, and the New York Contemporary Five ensemble. His long career as an educator has focused on ethnomusicology, looking at the history of African-American music from its origins in Africa to its current state.

* Wendy Oxenhorn is the recipient of the 2016 A.B. Spellman NEA Jazz Masters Award for Jazz Advocacy, which is bestowed upon an individual who has contributed significantly to the appreciation, knowledge, and advancement of the art form of jazz.

NEA Chairman Jane Chu said, “As we celebrate the National Endowment for the Arts’ 50th anniversary this year, it is especially important to honor the musicians and advocates whose efforts have helped to shape and expand our cultural heritage. Through their talent, creativity, passion, and curiosity, these four individuals have made invaluable contributions to jazz and I look forward to celebrating them in Washington, DC, next year in collaboration with the Kennedy Center.”

A free concert honoring the 2016 NEA Jazz Masters will be presented at 8:00pm on Monday, April 4, 2016, at the Kennedy Center’s Concert Hall and also available in a live video stream at arts.gov, Kennedy-Center.org, and NPR.org/Music. In addition, as a way of expanding opportunities for the public to engage with the artists and their music, the celebration will include other activities April 2-5, such as moderated panel discussions and listening parties at NPR headquarters in Washington, DC, and educational opportunities for local DC students, which will feature some of the 2016 NEA Jazz Masters. More details on these events, including how to obtain tickets for the April 4 concert, will be announced in early 2016.

"We are honored to host the 2016 NEA Jazz Masters ceremony and to welcome four mainstays of the jazz world to the nation's center for the performing arts. Washington has a unique place in the history and evolution of jazz, having been the home of legends including Duke Ellington, Frank Wess, and our very own Dr. Billy Taylor. Jazz also has an exciting place in the Kennedy Center's programming with the leadership of our extraordinary Artistic Director for Jazz, Jason Moran," said Kennedy Center President Deborah F. Rutter. "This celebration brings us even closer to the jazz community, and we are elated to be a part of such an important recognition of outstanding artistry and inspiring advocacy for a true American art form."

NEA Jazz Master awards are bestowed on living individuals on the basis of nominations from the public including the jazz community. The NEA encourages nominations of a broad range of men and women who have been significant to the field of jazz, through vocals, instrumental performance, creative leadership, and education. The NEA is currently accepting nominations for the 2017 NEA Jazz Masters (deadline: December 31, 2015). Visit arts.gov/honors/jazz for more information and to submit a nomination.

Each year since 1982, the National Endowment for the Arts has conferred the NEA Jazz Masters award to living legends in recognition of their lifetime achievements and exceptional contributions to the advancement of jazz. With this new class, the NEA has honored 140 great figures in jazz. More information about the NEA Jazz Masters and the agency’s collection of free jazz content is available here.

The NEA also supports the Smithsonian Jazz Oral History Program, an effort to document the lives and careers of NEA Jazz Masters. In addition to transcriptions of the comprehensive interviews, the website also includes audio clips with interview excerpts. This project has transcribed the oral histories of more than 90 NEA Jazz Masters.

Established by Congress in 1965, the NEA is the independent federal agency whose funding and support gives Americans the opportunity to participate in the arts, exercise their imaginations, and develop their creative capacities. Through partnerships with state arts agencies, local leaders, other federal agencies, and the philanthropic sector, the NEA supports arts learning, affirms and celebrates America’s rich and diverse cultural heritage, and extends its work to promote equal access to the arts in every community across America. This year marks the 50th anniversary of the National Endowment for the Arts and the agency is celebrating this milestone with events and activities through September 2016. Go to arts.gov/50th to enjoy art stories from around the nation, peruse Facts & Figures, and check out the anniversary calendar.

About the John F. Kennedy Center for the Performing Arts

The John F. Kennedy Center for the Performing Arts is America's living memorial to President Kennedy, and the nation's cultural center. Under the leadership of Chairman David M. Rubenstein and President Deborah F. Rutter, the nine theaters and stages of the nation's busiest performing arts facility attract audiences and visitors totaling 3 million people annually; Center-related touring productions, television, and radio broadcasts welcome 40 million more. Opening its doors on September 8, 1971, the Center presents the greatest performances of music, dance, and theater; supports artists in the creation of new work; and serves the nation as a leader in arts education. With its artistic affiliates, the National Symphony Orchestra and Washington National Opera, the Center's achievements as a commissioner, producer, and nurturer of developing artists have resulted in more than 300 theatrical productions, and dozens of new ballets, operas, and musical works.

2016 NEA Jazz Master Gary Burton's four-mallet technique on the vibraphone gave the instrument a new musical vocabulary in jazz and a fuller, more piano-like sound than the traditional two-mallet approach. He was one of the progenitors of jazz fusion...
Profile

Wendy Oxenhorn—recipient of the 2016 A.B. Spellman NEA Jazz Masters Fellowship for Jazz Advocacy—is the executive director and vice chairman of the Jazz Foundation of America (JFA), which is committed to “providing jazz and blues musicians with finan... 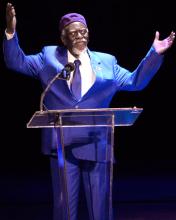 2016 NEA Jazz Master Pharoah Sanders is a Grammy Award-winning jazz saxophonist who has shown a remarkable facility performing in a variety of styles, from free to mainstream.

Celebrate the 2022 NEA National Heritage Fellows in a Documentary Film

Meeting of the National Council on the Arts on October 28, 2022, in Washington, DC