I came from the Vietnam War era, so we were the flower children and protesting everything. We were the ones that initiated this Hawaiian renaissance in the ‘70s. When I graduated from Auntie Ma‘iki, we were one of the first graduating classes, and we all went out and started our own schools and started to revive interest in Hawaiian cultural practices and Hawaiian language, and started Hawaiian language immersion school.

I see hula as resistance. I see hula as a tool for organizing community around issues that are facing Native Hawaiians. We have been able to reclaim our cultural practices through the hula. We have been able to regain our language through the hula. All the songs and dances, the chants, are in the Hawaiian language, and you have to study the language in order to be able to perform the hula, to understand the hula. Hula was my entrée into Hawaiian language, into Hawaiian culture.

Vicky Holt Takamine, founder of the Arts Endowment-supported P'AI Foundation, was born into a hula family. Her mother and grandmother were dancers, and from a young age, Takamine told her mother that she wanted to learn how to dance hula. In addition to teaching and dancing hula, Takamine is also an advocate for Native Hawaiian artists and cultural practitioners. Read our full interview with her in the American Artscape issue: Showing Strength Through Creativity. 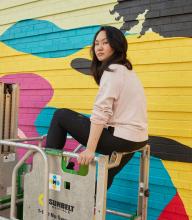 Moving Past Liat: Amanda Phingbodhipakkiya Reflects on What It Means to be an Asian American Woman Artist

In this first-person piece, multidisciplinary artist Amanda Phingbodhipakkiya reflects on what it means to be a contemporary woman artist who's also Asian American.

Notable Quotable: Kim Blaeser (Anishinaabe) on the Importance of Poetry in Native Communities